You are here: Home › Israeli Scientists “Delete” Cancer With CRISPR…Or Is There Possibly More That Could Happen? 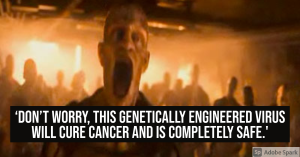 While many people thought that the future was (I speak of the 1960s to the early 2000s) travelling to the stars, it has been shown that the trend is to go into the human body’s microcosm instead. Genetic editing and the creation of “supermen” through gene therapy has become and is going to likely grow in popularity, and as the Times of Israel reports, Israeli scientists are hailing a new breakthrough in editing genes to eliminate cancer.

Israeli scientists say they have destroyed cancerous cells in mice with a method so pinpointed it’s as if “tiny scissors” were being used to target only affected cells, while leaving everything around them intact.

“This is the first study in the world to prove that the CRISPR genome editing system, which works by cutting DNA, can effectively be used to treat cancer in an animal,” said Prof. Dan Peer, a cancer expert from Tel Aviv University, after his peer-reviewed research was published in the Science Advances journal.

“There are no side effects, and we believe that a cancer cell treated in this way will never become active again.” He added: “This technology can extend the life expectancy of cancer patients and we hope, one day, cure the disease.”

He told The Times of Israel: “If we can use this technology, then within three treatments we can destroy a tumor. This technology can physically cut the DNA in cancerous cells, and those cells will not survive.”

Peer called it “a more elegant chemotherapy” and said he dreams that it will replace that treatment, which can take a drastic toll on cancer patients because it is administered to the whole body.

The research uses genome editing technology that is currently used only for rare diseases and only on cells that are removed from the body. It has been adapted to edit — or “delete” — cancer cells. (source)

This sounds very nice, but there are two major problems.

The first problem is that this uses CRISPR, which is a “gene editing” tool written about by Shoebat.com before that uses aborted fetal cells to manipulate and do “gene editing”. It cannot exist without infanticide, and to that, it is not only experimental, but carries many serious dangers with its use, the biggest of which is, in spite of all scientific knowledge, not knowing what one is doing and having an accident, such as in the movie “I Am Legend”, where a cancer cure turns into a disease that infects and destroys most of the human race.

The second problem is one of philosophy and the practice itself. While these scientists claims that there are “no problems”, we really do not know this, since problems tend to show up at a much later point, and sometimes they are so bad they cannot be solved. However, in the name of pride, profits, or fame, “cures” such as this above are pronounced as such and then rushed off to production with minimal oversight so that people may reap the benefits without truly examining the potential consequences.

CRISPR involves editing genes. We know that cancer comes from mutated cells, and we might say to that, mutated genetics that caused the cells to become mutated. This is why radiation causes cancer- the rays that pass through the body “hit” genetic code and misalign it, which causes abnormalities.

Ask yourself, if one is using this “editing” program, assuming NO errors, could it be possible for a human to make a mistake, even a small or unintentional one? It is most certainly true, and it could have disastrous consequences. This is to say nothing to the structure of the CRISPR model itself, which still needs to be improved, and may cause very serious consequences even with proper use that are not known right now.

Science fiction and horror warns us of this kind of genetic manipulation and its potential to have very disastrous consequences. It could be “The Thing” or “I Am Legend” of Hollywood lore, Metallica’s “All Nightmare Long” (watch the music video), games such as the “Resident Evil” series or the “Doom” series, or something else, but what we do know is that man knows very little about even his own genetic makeup in spite of the tremendous advances in technology, and that small things done with good intentions can have disastrous consequences.

Then there are those people with malicious intentions, such as the planned “Operation Cherry Blossoms At Night” by the notorious Japanese military scientist who conducted experiments on human beings as a part of Unit 731, Shiro Ishii, who wanted to attack the US using bioweapons. One can only imagine what a program such as this in combination with a biowarfare program could do, and given human nature and how all things are ultimately attempted to be used for military purposes, that such is likely being done right now by many governments.

Many people look at genetic editing as something that is good and wonderful. However, it is fraught with serious dangers, it is highly risky, errors made might not be able to be safely reversed, and it risks having consequences that are terrible beyond even one’s imagination, and yet it is now become a major trend that will grow for the future.

If people thought 2020 was bad, wait for the rest of the decade as economic and political problems escalate towards militarization, and one can only wait and see how developments such as this program in combination with military “research” will be used in the pursuit of worldly power that may lead to unpreceded destruction in history.