You are here: Home › South Sudan Has Massive Flood, Potentially Millions May Starve, Be Displaced 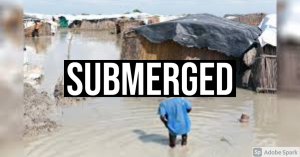 Due to a series of violent weather patterns, social instability, and political chaos, Africa has seen many people flee from her as refugees to Europe. This has caused trends of nationalism, racialism, and militarism to appear again, and also has caused untold suffering for millions in Africa. Two of the major flashpoint areas we have been watching are tensions in the Mali-Burkina Faso-Nigeria region, and the instability in Tigray-Eritrea-Ethiopia, both of which were previous sources of migrants and have continued to remain poor and dangerous amid worsening global crises with no end to be seen.

But now another crisis seems to be starting in the nation of South Sudan, which has been ravaged by war ever since her independence in 2011 from Sudan. The nation has just experienced a massive flood that has destroyed crops and put five million people at risk of hunger.

Since July the United Nations and the Food and Agricultural organisation have been warning that South Sudan will face widespread hunger, but the government is not alarmed. Heavy rains and seasonal flooding since July last year have adversely affected more than a million farmers resulting in widespread damage to agriculture and property.

A recent analysis by the Integrated Food-Security Phase Classification (IPC) released December 24 indicates that life-threatening hunger is increasing rapidly in South Sudan and 7.5 million people, or two-thirds of the population in South Sudan, are expected to be in dire need of humanitarian assistance in the coming year.

The UN Children’s Fund (Unicef) has also warned that at least 4.1 million children in South Sudan will need humanitarian assistance in 2021.

Unicef further said it expects the food and nutrition crisis to continue in 2021 as there have been few gains in 2020 in addressing food insecurity and severe flooding in large parts of the country.

The UN agency also appealed for $197.8 million for 2021 to assist 5.1 million people, including 3.7 million children, affected by multiple shocks, including conflict, disease, drought and flooding.

“South Sudan children grow up thinking crises are normal. They are often hungry, exposed and susceptible to communicable diseases and are homeless due to flooding, said Dr Mohamed Ayoya, Unicef Representative in South Sudan.

Food production South Sudan is often affected either by floods of drought, as well as pockets of conflicts that still go on in some parts of the country,

More than 30 per cent of children between the ages of six months and five years in Pibor County suffer from acute malnutrition, double the level considered an emergency.

The analysis by IPC’s Famine Review Committee said that tens of thousands of people are facing catastrophic conditions in six South Sudanese Counties, with the worst being Pibor County. John Barsa, acting deputy administrator at the United States Agency for International Development said that the US is concerned by the worsening food-security situation and has donated more than $425 million in emergency food and nutrition assistance. (source)