You are here: Home › Venezuela Declares Attempt To Switch To Fully Digital Currency 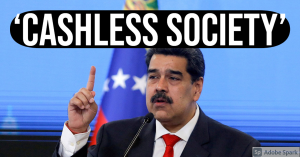 According to a story reported by Bloomberg, the South American nation of Venezuela, which has been suffering from veritable civil war for years now alongside the complete destruction of her currency, recently saw interesting statements from President Maduro, which said that he is planning to switch Venezuela to a fully digital currency.

Venezuela’s government is planning to move to a fully digital economy as hyperinflation has made worthless bolivar notes practically disappear, and dollarization expands through the local financial system.

The U.S. dollar has operated as an escape valve for Venezuela amid U.S. sanctions and collapsing oil revenues, President Nicolas Maduro said in a televised interview with Telesur on Friday. He said 18.6% of all commercial transactions are in dollars, while 77.3% are carried out in bolivars with debit cards. Only 3.4% are paid with bolivar notes.

“They have a war against our physical currency. We are moving this year to a more profound digital economy, in expansion. I’ve set the goal of an economy that’s 100% digital,” Maduro said, adding that physical money will eventually disappear. (source)

Whether or not he can make this happen is not the point. The fact that he said this, and is the first world leader to do so, is significant. Remember too that in spite of the criticism of Venezuela, she is a regional petropower in South America, and most of her troubles are due to geopolitical interference from the US because from a military standpoint, the nation is the most important military power in Latin America that Russia relates with. Likewise, Venezuela considers Russia to be her main ally in a geopolitical sense, and therefore given the proximity of the US to Venezuela, comparatively speaking, she is considered a serious threat to US interests.

Will Maduro be able to do this? One does not know. However, his words are an indication of the direction the world is taking, including major nations such as the US and Russia.

While it is not discussed at large yet, there is definite move towards a ‘cashless’ society and a purely ‘digital’ currency, which has a large number of problems, let alone from the fact that wealth is tied to electronic equipment and it can be hacked, but that with the push of a button, one’s entire life savings can be ‘frozen’ and a man trapped wherever he is. This could be for any reason, but given the human tendencies to sin, in the hands of evil men, it could be used to economically impoverish and destroy those who they do not like, or even at random.

The only benefit to a digital currency is the control over producing and seizing money from other people by the men who control the system that creates the money. Any consumer benefits are greatly outweighed by the potential for abuse that those who control the system may have, and as such it is a poor investment. However, as a trend for the future, it is going to be something to watch for, since this is being aggressively pushed on the whole world and its voice is only most likely going to get louder as the dollar dies and the world edges closer to a major economic reset as a part of the general trend towards war.