You are here: Home › One Of The Riot Leaders Who Also Was NOT Arrested Is The Son Of A NY Judge And Past President Of The National Council Of Young Israel

By Andrew Bieszad on January 9, 2021 in Featured, General 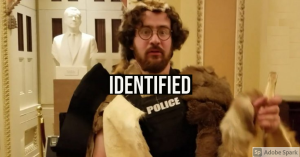 More information is emerging about the “leaders” of the Capitol building protests. I have already covered Jacob Chansley, a.k.a. “Jake Angeli”, but another leader has emerged. This person, who lead the riots but also has mysteriously not been arrested is Aaron Mostovsky, who is an Orthodox Jew, the son of New York Judge Shlomo Mostovsky and the past president of the National Council of Young Israel.

The son of a New York judge and former president of the National Council of Young Israel, an Orthodox synagogue association that has been outspokenly pro-Trump, was among the rioters who stormed the Capitol on Wednesday, according to Gothamist.

Mostofsky was photographed several times on Wednesday next to Jake Angeli, a QAnon supporter who also wore a horned hat and furry outfit, though it is not clear that their outfits were coordinated.

Get The Times of Israel’s Daily Edition by email and never miss our top storiesFREE SIGN UP
He was among the many Orthodox Jews who came to the Capitol to protest, telling the Post that he wanted “to express my opinion as a free American that this election was stolen” from President Donald Trump. Mostofsky is one of dozens of “persons of interest” sought by Washington police for unlawful entry to the building.

Aaron Mostofsky (in fur pelt) and a protester with the Confederate flag in the US Capitol Rotunda on January 6, 2021, in Washington, DC. (SAUL LOEB / AFP)
“We were cheated,” he said. “I don’t think 75 million people voted for Trump — I think it was close to 85 million.”

Mostofsky’s brother Nachman, the executive director of Chovevei Zion, a politically conservative Orthodox advocacy organization, as well as a Brooklyn district leader and vice president of the South Brooklyn Conservative Club, also attended the rally Wednesday but did not enter the Capitol.

Speaking to the Jewish Telegraphic Agency on Wednesday before his brother was identified as the man in the fur pelt costume, Nachman Mostofsky condemned the violence at the Capitol but suggested that it was carried out by the anti-fascist group Antifa — and said it was hypocritical to call out the violent protests in light of incidents of violence at the George Floyd protests over the summer.

“No conservative will condone what happened today, the actual storming of the Capitol … it was unpatriotic,” he said. “But we heard for months during the summer when people don’t feel heard, this is what happens.”

Supporters of US President Donald Trump, including member of the QAnon conspiracy group Jake Angeli, aka Yellowstone Wolf (C), enter the US Capitol on January 6, 2021, in Washington, DC. (Saul LOEB / AFP)
Asked by Gothamist on Thursday about his brother’s involvement with the mob that entered the Capitol, Nachman said Aaron was “pushed inside.”

“My brother did nothing illegal,” Nachman told Gothamist. “He definitely was not part of the riot.”

Gothamist reported that Aaron Mostofsky was not arrested and was allowed to walk out of the Capitol. (source)

The fact now that two leaders- both who were not arrested and both who have demonstrated ties to Israel -add more to the many questions being asked about this “protest”, and especially the “leadership” that seems to avoid prosecution while the other people who they lead into the Capitol are being prosecuted.

Not As Bad As It Seems: The Trump Ban From Twitter
Right-wing Fanatics Attacked A Republican Police Officer, Bashed His Head Open And Killed Him
Follow