You are here: Home › Eating Bugs Is Being Pushed For The Future 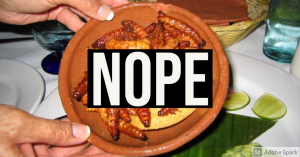 In the movie Soylent Green, it is about a dystopian science fiction type future, where people eat “soylent green”, a cracker that is made out of human carcasses. As disgusting as it may be, it does represent something of the future, where living in a world gone mad, centralized beyond imagination into the hands of a few to the great detriment of the many, the consumption of this food is part of a sort of living hell that men are subjected to, and a reminder of their lowly state in comparison to those in power above them.

It is with interest then that there has been a push for people to eat insects, which started with a lot of laughter but has been seriously advanced as “legitimate”. According to the Japan Times,

Ellie Inc.’s cheeseburger looks just like the real deal. So does the hearty bowl of minestrone and the chiffon cake with whipped cream advertised on the company’s website. They apparently taste like the real thing, too, except for hints of a nutty, sweet flavor characteristic of one of their ingredients — silkworms.

The products developed by the startup under the firm’s Silk Food banner contain edible sericulture insects and are marketed as a high-protein, low-cost alternative and sustainable food source. And there’s more on the menu: The firm has produced Italian, sesame and Caesar salad dressings and a dipping sauce made from silkworms, with new items in the works.

“When I became interested in venturing into this business, I sampled various insects, including crickets, which are one of the more popular edible critters,” says Takahiro Kajikuri, the co-founder of Ellie. “None tasted really good until I had the opportunity to try a fresh silkworm larvae. I knew this was it.”

Crawling, hopping and, at times, swarming, insects have long been eaten by humans despite their cringe-inducing image. According to the Food and Agriculture Organization of the United Nations, a quarter of the world’s population — or around 2 billion people — consume bugs such as beetles, caterpillars, bees, wasps, ants and locusts as part of their diet. And it’s not just humans. Insects constitute high-quality food for livestock, poultry and fish as well.

There are obvious health and environmental benefits to eating bugs. They are nutritious and low calorie, and produce far less greenhouse gases. According to a landmark 2013 report by the FAO titled “Edible Insects: Future Prospects for Food and Feeds Security,” pigs produce 10 to 100 times more greenhouse gases per kilogram than mealworms.

The report also says insects feed on bio-waste, use significantly less water than livestock and can be farmed more easily while offering jobs to rural inhabitants. Such alternative food sources will be increasingly necessary as the world’s population is set to reach 10 billion by 2050, it says.

Restaurants in the United States are picking up on the trend. The Oyamel Cocina Mexicana in Washington, for example, serves grasshopper taco, while the Black Ant in New York offers black ant guacamole. There are also numerous companies selling cricket, locust, ant and beetle flour. All these factors appear to promise a thriving industry once consumer disgust can be overcome.

According to Global Market Insights, the market for edible insects is forecast to soar to $1.5 billion in 2026 from $112 million in 2019. Meanwhile, Meticulous Market Research said in a recent report that COVID-19 could potentially promote the consumption of insect-based food products as meat producers face operational and logistical challenges posed by the pandemic. (source)

This “trend” of eating insects is being forced, from what everything seems, as a part of a philosophical-political agenda.

There is no need to eat insects. People don’t’ need to east on worms. Rather, like Soylent Green, it is about a philosophy and power game. the same can be said about the so-called “plant based foods”. Those have been around for decades- the new “food” is not about something new, but about power.

We are entering into an interesting era of human history, something told about by science fiction writers and what few believed and even fewer realized could happen. Science fiction is becoming reality, and man is finding himself a prisoner in his own Earth, that by his very existence, exercising his natural impulse to be a person who thinks for himself is increasingly a criminal act, or at least inclines that way.