You are here: Home › Not Just Trump- Iranian PressTV News Deleted By Facebook 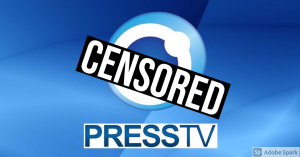 Although it was restored later, the Iranian news outlet PressTV had her Facebook page abruptly deleted by the corporate behemoth according to an official statement from the outlet.

In a notification upon taking down the page early on Tuesday, the US-based social media giant said the decision was “final,” adding that it could not provide additional information for “safety and security reasons.”

Facebook, however, reversed the decision hours later in response to an appeal filed by Press TV.

Over the past years, Facebook — along with YouTube, Twitter and Google — have repeatedly targeted Press TV among other media outlets of Iran and the countries critical of the West and the Israeli regime’s occupation of Palestine.

In June, Facebook started to label Press TV, Russia’s Sputnik, and China’s Xinhua News Agency as “state-media”, adding it would block them from running advertisements in the United States, following the three outlets’ widespread reporting of protests in the US against police violence and systemic racism.

The latest attack coincides with Press TV’s coverage of shocking post-election violence in the US, which saw supporters of defeated President Donald Trump storm and ransack the US Capitol building last week. (source)

Regardless of what one thinks about Iran, and while it is true that PressTV has a history of being censored, the recent incidents with Trump only highlight the severity of what is taking place.

Trup is the President of, for now, the most powerful nation in the history of the world. Yes, he has limits on his power, but the fact is that Trump’s words, actions, and what happens to him, for good or for bad, carry a lot of meaning in the world. It is why ‘image’ is so important for a man of his position, because personal actions in public become politicized by choice or not.

If Trump can be “depersoned” by both the Democrats and Republicans, it means a lot. Not only does it give legitimacy to this kind of behavior in other nations, but it means that no one is safe from being depersoned.

Thousands of accounts have been censored, right or wrong, in the last week, and one should expect this trend to continue for the future, as increasingly, the concept of ‘freedom of speech’ will come to mean the freedom to agree with the current orthodoxy and not question if the human source that is enforcing that orthodoxy is right or wrong. Rather, any opposition will be met with violence and silencing, which can take a multiplicity of forms.

Either way, we are witnessing the twilight of the concept of free speech and its replacement with a new concept. Such changes are not uncommon either- they happen in history many times -but when they do happen, they have major consequences that can last for centuries.

Many people criticize the ‘dark ages’ as a time when the Church had power, and this is because of anti-religious sentiments. But the reality is that such is not a ‘dark ages’ at all. Rather, we are heading into a modern ‘dark ages’ but a real one, and this one with the religion of the self-deification of man coupled with a hatred of God and truth.

In other words, instead of seeking God, man is attempting to crown himself as god in God’s place, with the use of super technologies, and that never ends well.

Thus this struggle is a lot bigger than just Iran or other pages being blocked- it is about how no one is safe, and anybody for any reason can and may be targeted for ‘depersonification’ in the name of a new philosophy that is as old as Eden as well.