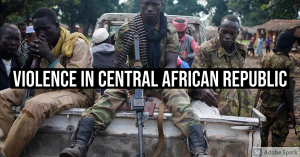 Violence in African nations was one of the leading causes for the migration wave of 2015 and 2016. As such, watching political trends in Africa can be a way to monitor and keep track of potential waves of migration that may attempt to come to Europe. Right now, there are already serious political conflicts in Burkina Faso and Tigray that have displaced millions and put millions more at risk of starvation. Now, according to Africa News, there has been another round of violence in Central African Republic at the hands of rebels fighting for control over the government.

The rebels are protesting the re-election on Dec. 27 of President Faustin-Archange Touadera. Following the Jan. 4 announcement of Touadera’s victory, the rebel coalition said they would take the capital. They had also taken towns in other parts of the country before the election.

The army is supported in its battle against the rebels by forces from Rwanda, Russia, France and the United Nations.

The fighting began early Wednesday at the entrance to Bangui, near its PK11 and PK12 areas and in the Bimbo neighborhood, Prime Minister Firmin Ngrebada said in a post on Facebook.

“The attackers who came in large numbers to take Bangui have been vigorously pushed back,” he said.

“Early this morning, the criminals, the rebels and enemies of the people of Central African Republic, the mercenaries and terrorists, including the Central Africans who lead them, they launched the assault in the Begoua sector. But the defense and security forces did not let their guard down,” he said.

U.N. forces in Central African Republic, known as MINUSCA, and other allied forces engaged as well, he said.

“We stood up as one man and we routed them. They are on the run everywhere,” he said, asking Bangui’s residents to be vigilant and signal the presence of rebels so that they can be tracked. (source)

What is going to happen here is yet to be seen. However, if violence increases, there is a chance that further violence may help spark a migration wave, and with the current trends of nationalism increasing in Germany and all across Europe, the combination is potentially deadly and could risk furthering the already dangerous trends even more toward conflict and war.

Franklin Graham Declares That Those Who Voted Against Trump Are Like Those Who Betrayed Christ
The Government Of China Makes This Declaration: ‘The Rise Of China Is Has Come.’
Follow