You are here: Home › Iran-Contra Is Back As Tehran, Moscow Pursue New Relations With Nicaragua

By Andrew Bieszad on January 17, 2021 in Featured, General 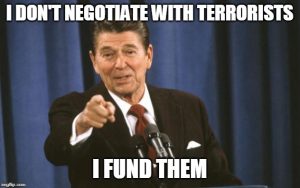 In many regions of the world, there are ‘wildcard’ areas that are less inclined to the social and political tendencies of their neighbors. In the case of Central America, Nicaragua is one of those regions, as the small nation is a long-time Soviet and Iranian ally, and ha been a ‘thorn in the side’ of US regional foreign policy for Latin America. It was one of the reasons that the “Iran-Contra” scandal happened in the 1980s, and why the US backed right-wing death squads in the nation.

As the world is returning to a more ‘war-like’ state from the not-so-recent past, the Tehran Times interestingly reports that as Moscow has been doing the same, Tehran is now re-opening new relations with Nicaragua.

On Wednesday evening, the signing ceremony of the MoU was held online in Tehran and Managua.

Majid Salehi’s welcome was the initiator of the ceremony. He considered museums as an important factor in expanding cultural relations and friendship between the two countries.

He added: “In the first step and until the situation normalizes, the two museums will try to get acquainted with each other’s potentials through webinars, to be able to plan for future practical collaborations.”

“Iran is one of the oldest civilizations in the world and it is an honor that the 125th anniversary of the National Museum of Nicaragua has coincided with the signing of this memorandum,” said Luis Morales, the Minister of Culture of the Republic of Nicaragua.

It is an honor to be present at the signing ceremony of this Memorandum of Understanding and I consider it an important step in strengthening relations between the two countries,” said Javiera Pérez Guerra, the director of the National Museum of Nicaragua.

She explained that the National Museum of Nicaragua, with the support of the Ministry of Culture, has added new galleries to the museum and that the country’s cultural diversity, especially its African roots has had a great impact on the enrichment of the National Museum.

“This document is a clear message to the world that in such difficult circumstances, world peace can be strengthened.”

At the end of the ceremony, Majid Salehi, ambassador of The Islamic Republic of Iran in Nicaragua, stated that both embassies will make every effort to implement the issues agreed upon in this memorandum to be a key step in strengthening cultural relations between the two countries. (source)

The Cold War is back, and the way things are moving, trends indicate that they could evolve into a hot war in the future.

This is not just about a ‘museum’. This is about a lot more. It is always small trends that grow into something larger, no matter what the situation is.

As such, it will be important to watch and see what happens in that nation, for if trends continue, then “right wing death squads” might not be something of the past, but the past just waiting to repeat in the future.

“Protests” For The Election, And A Lesson From Monty Python
Yang Calls For UBI In New York
Follow