You are here: Home › GM And Microsoft Begin Partnership For Auto Technology 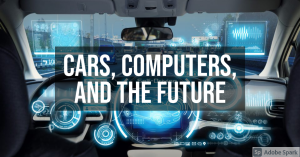 Electric cars and the integration of computers into cars to a point where the two are indistinguishable is a long-term trend for the future to watch. There are multiple sub-trends tied to this, such as the reorganization of cities, urban planning, and changes to the transportation and logistics systems that will affect political trends also. While it is still a ways away, the plans to not make obsolete, but much less affordable the gasoline engine are well on their way, as well as to gain more control over what a motorist does or can do with his vehicle.

According to a story from the AP, automotive giant GM has launched into a venture with Microsoft to integrate Microsoft computing into future cars.

General Motors is teaming up with Microsoft to accelerate its rollout of electric, self-driving cars.

In the partnership announced Tuesday, the companies said Microsoft’s Azure cloud and edge computing platform would be used to “commercialize its unique autonomous vehicle solutions at scale.”

Microsoft joins General Motors, Honda and other institutional investors in a combined new equity investment of more than $2 billion in Cruise, bringing its valuation to about $30 billion. Cruise, which GM bought in 2016, has been a leader in driverless technology and got the go-ahead from California late last year to test its automated vehicles in San Francisco without backup drivers. (source)

The real changes to this trend will not tart until the trucking industry begins to integrate them, a process which is currently in the experimental stages but is well on its way. Right now, there are serious discussions about making ‘trucker only’ highways for automated vehicles, and fleets of trucks that run on partial automation operating on the highways with minimal driver oversight.

The future is automation, in all aspects. We are living through Industrial Revolution of the early 19th century again, but this time with computers, microchips, integrated circuits, and robotics. It is a future that was dreamed about in the 1960s by science fiction writers and it is currently taking shape. As such, car companies in the future, more so than they already are, will be software companies, and vice versa, as the link between machine and technology will become nearly indistinguishable from the other. The question is, however as we have pointed out at Shoebat.com, how this integration relates to the human person, and to what extent it goes, namely, does man enhance himself and his natural capabilities with machines, or does he instead attempt to deny God and rather to place the concept of divinity into a machine itself?