You are here: Home › The Dogs Come To Eat Their Own As Antifa, Anarchist Protests Target Democrat Party Buildings 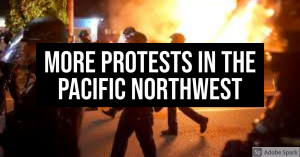 The proverbial idea of the “dogs of war” often come with a warning that they can “eat their own”, or turn against the very people who employed them. Such is a warning throughout history, and often ignored by people until it is too late.

According to Reuters, in the historically volatile Pacific northwest states of Oregon and Washington, where the extreme left meets the extreme right in an American-type formation of the Bohemia and Moravia tensions that lead to wars in Europe, Antifa and anarchist protesters are now vandalizing and attacking Democrat party buildings out of anger at Biden just a day into his inauguration.

Anti-government and anti-fascist protesters in Portland and Seattle vandalized a Democratic Party office and other buildings and scuffled with police on Wednesday, protesting against President Joe Biden’s inauguration.

People dressed in black and with their faces covered broke windows and the glass door at the Democratic Party of Oregon business office in Portland, spray-painting an anarchist symbol over the party sign, video posted on social media showed.

“We don’t want Biden. We want revenge for police murders, imperialist wars, and fascist massacres,” read a banner they marched under.

The new Democratic president was sworn in on Wednesday, urging unity and restoration after Republican Donald Trump’s divisive tenure.

Portland has been the scene of unrest for months, with civil rights, anarchist and anti-fascist protesters scuffling with police and occasionally with right-wing militias and Trump supporters.

The protests began in the summer as part of nationwide demonstrations against racism and police brutality following the death of George Floyd, a Black man who died in Minneapolis in May after police pinned his neck to the ground for nearly nine minutes.

Before descending on the Democratic Party office, some protesters from a group of about 150 scuffled with police on bicycles, police said in a statement. (source)

Ask yourself, if this was a right-wing group, the protests would be international news, and there would be calls of ‘terrorism’ and ‘violence.’

The reason, it may seem, this is not the case is because this violence is not politically necessary, and given that the country is already ‘democrat friendly’ now, it is enough just to deal with the protests and not complain further about them lest it agitate sentiment against the political left.

The effectiveness of many protests often depends on “optics”, as things are a matter of perspective before truth for many, especially in a nation such as the US where truth is relative to one’s opinion. Since there is no difference between the right and the left, whatever side is emphasized is done so in order to advance the same shared philosophy, playing one against the other until a given objective is realized.

The trend right now is that political violence and extremism will increase, and become far worse on both the left and the right under Biden. It is already his first real day as president and there is this mass violence in these states. If this is the first day, one can imagine what things will be like in a year, or four from now.

The main takeaway that people should have from this trend is to, as much as possible, do not get close to either side, for while opinions one may agree or disagree with, both sides are philosophical misaligned and run by persons and groups with malevolent inentions. This is not new, but an old problems that many seem to forget or thing that a given time is somehow “different” than previous times.

Learn from the lessons of history, and continue to prepare for more difficult times, because this decade will continue to see political escalation, and it any talk of ‘unity’ no matter who it is from without addressing the tensions and resolving them, which is highly unlikely to happen, is just placing a proverbial bandaid on a festering and infected wound that is close to killing the host.