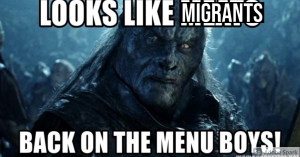 Shoebat.com has been emphatic that immigration is used as a political football without any care for the migrants or citizens affected. Both political parties use and abuse migrants for their advantage, and the emphasis used changes depending on the particular outcome desired. President Trump, for example, actually did very little to change US migration policy save to make it slightly more difficult, but it was defined by a lot of big talk meant to encourage the most xenophobic of ideas among his base.

Now with Biden in power, he is continuing the polarization of the issue by order from Biden that, as reported by Fox News through Tucker Carlson, a message was sent to “release them all” as it pertains to persons held in ICE custody.

On Joe Biden’s first day in office, the Department of Homeland Security issued a sweeping directive calling for a 100-day pause in deportations.

“Tucker Carlson Tonight” has since obtained an internal email sent Thursday to ICE officers in Texas that shows how the order was enacted.

“As of midnight tonight, stop all removals,” the email reads. “This includes Mexican bus runs, charter flights and commercial removals (until further notice) … all cases are to be considered [no significant likelihood of removal in foreseeable future].”

The email goes on to say: “Release them all, immediately. No sponsor available is not acceptable any longer.”

The official who sent the email noted that he was just “the messenger” explaining the directive. In other words, It wasn’t his idea. It was Joe Biden’s. (source)

It will be interesting to see how this story develops, and what the public reaction will be, although it is likely to be what many expect.

Biden promised, among his many inauguration day platitudes, that he was going to ‘bring together’ the country. However, his actions so far are only accelerating the same tensions that people spoke about with Trump.

Expect this trend of political escalation and tensions to continue under the Biden administration, and to become much worse as care for both citizen and migrant alike are discarded, and the real issues are not resolved, but greatly worsened in the name of political gain.

It’s not about “left versus right”, or “migrants versus citizens.” It is about keeping the public in a false left-right dichotomy without care for the good will of others.