You are here: Home › Violence Worsens As Countless Are Dead And Millions At Risk Or Refugees In Tigray 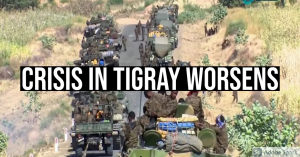 While the world is paying attention to other news, there does not seem to have been a lot of focus given to Tigray. The tiny region in northern Ethiopia with a separatist history has been the site of a terrible conflict that has resulted in countless dead and millions at risk or displaced, and as the Christian Post reports, with continued military incursions from Ethiopia and Eritrea, the situation only seems to be worsening.

Survivors of the ongoing Tigray conflict in Northern Ethiopia are now speaking out about the horrors of what they and their communities experienced after hundreds of citizens were reportedly killed and millions of others are in dire need of assistance.

Witnesses who spoke with The Associated Press have detailed killings, looting and other abuses committed by Eritrean soldiers in Tigray, a predominantly-Christian northernmost region of the East African country.

Known as the Tigray War, the armed conflict has been ongoing since last November between the Tigray Regional Government (led by the Tigray People’s Liberation Front) and forces supportive of the Ethiopian government which include military forces from Eritrea.

Unconfirmed reports have suggested that there have been a series of fatal assaults committed against citizens in the area.

“They would kill you for trying, or even crying,” a woman named Zenebu, a 48-year-old healthcare worker who lives in Colorado but was trapped in Tigray for weeks while visiting her mother, told AP.

The witness said that some Eritrean soldiers went from door-to-door, killing Tigrayan men and boys as young as 7 years old.

Zenebu detailed how she looked on as she saw Eritrean soldiers loot the belongings from residents’ homes. She said their pockets were filled with stolen jewelry and recalled some troops trying on looted clothing.

“They were focused on trying to take everything of value,” she added, saying that they even stole diapers. She detailed that trucks were loaded with boxes of looted items that were to be delivered to places in Eritrea.

I am going to have more to say about this in the near future. The trends of violence in Tigray are very serious and merit an entire discussion into themselves.

What I am going to say about this, is to be very careful of any trends suggesting foreign intervention into Tigray against Ethiopia and Eritrea. This is not to say that either nation is ‘good’, but to say that, as I will elaborate on in a future piece, what is happening in East Africa right now has the potential to become a world disaster that will overlap many current trends including the rise of nationalism, potentially further and larger migrant crisis than in 2016, and possibly the movement of NATO troops into East Africa, providing a ‘shot in the arm’ for the US and potentially the Italians. The US has already been amplifying her rhetoric against Eritrea and Ethiopia, and no matter what happens, if one of those nations- Eritrea or Ethiopia -is pulled into a conflict, the other one will immediately follow.

Based on experience, it is more likely that Eritrea will be targeted first, since Eritrea has a long history of human-rights abuses and is also known to resist or turn down foreign aid, which is a move away from dependence and towards independence that directly interferes with the geopolitical goals of other nations, mostly the US and Europe.

Africa was the scene of the “struggle of empires” in the late 19th and early 20th centuries that preceded World War I, and it seems this trend is repeating again.