You are here: Home › India Cuts Internet Services In Areas Where Farmers Are Protesting

By Andrew Bieszad on January 31, 2021 in Featured, General 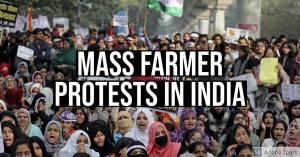 One of the most unfortunate and sad trends in the US has been the decline of the family farmer, which owing to the effects of mass agriculture has been stripped of his livelihood and to this, forced to become a slave of corporate production and stockholders. His profits have been destroyed, and with little to no way to pay his bills, many have been forced to ‘sell the family farm’ and some have even gone to end their own lives.

With violent protests besieging India, Reuters reports that the government has cut the Internet in the places where the protests are taking place.

India blocked mobile internet services in several areas around New Delhi on Saturday as protesting farmers began a one-day hunger strike after a week of clashes with authorities that left one dead and hundreds injured.

Angry at new agricultural laws that they say benefit large private food buyers at the expense of producers, tens of thousands of farmers have been camped at protest sites on the outskirts of the capital for more than two months.

At the main protest site near the village of Singhu on the northern outskirts of the city, there was a heightened police presence on Saturday as hundreds of tractors arrived from Haryana, one of two states at the centre of the protests.

“Many farmers’ groups have joined the protest site since last night,” said Mahesh Singh, a 65-year-old farmer from Haryana. “They have come to show their support and more farmers are expected to come in the next two days.”

India’s interior ministry said on Saturday internet services at three locations on the outskirts of New Delhi where protests are occurring had been suspended until 11 p.m. (1730 GMT) on Sunday to “maintain public safety”.

Indian authorities often block local internet services when they believe there will be unrest, although the move is unusual in the capital.

Farm leaders said the hunger strike by hundreds of protesters, primarily at Singhu and two other protest sites and designed to coincide with the anniversary of the death of Indian independence leader Mahatma Gandhi, would show Indians that the demonstrations were non-violent.

“The farmers’ movement was peaceful and will be peaceful,” said Darshan Pal, a leader of the Samyukt Kisan Morcha group of farm unions organising the protests. “The events on January 30 will be organised to spread the values of truth and non-violence.”

Agriculture employs about half of India’s population of 1.3 billion, and unrest among an estimated 150 million landowning farmers is one of the biggest challenges to the government of Prime Minister Narendra Modi since coming to power in 2014. (source)

Such behaviors are typical of centrally-controlled nations, but as the tendency for civil disorder rises, one might want to look at the same happening in the western world, where it could become a trend that communication outlets are conveniently shut off temporarily in the middle of a crisis to prevent information about it from getting out.

India Moves To Ban Bitcoin, Launches A National Cryptocurrency
One-Third Of America Is So Stressed They Are In A Concussion-Like State
Follow