You are here: Home › Censorship In The Name Of ‘Free Expression’ Is The Newest One Yet 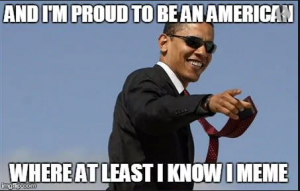 One of the trends that I have discussed is long-term moves toward the return of Russia to Soviet times, and with that, the return of Soviet tactics such as not seen since the Cold War. Given that the only real major exports which Russia has are cheap guns, cheap vodka, and AIDS-infected prostitutes (ask yourself, where are the Russian cars/trucks/cheese/vegetables/fruits/fish/machinery/computing systems/electronic technology and more so often associated with trade), another main export could be propaganda and bluffing, of which she is a master of (but not lying, as that title belongs to the areas of Anglo-American influence). That said, a new attempt at selling such an image was made after a law was passed saying, in the name of ‘fairness’ to Russian media outlets, that Russia could fine or censor sites like Facebook and Youtube for pointing out Russian-government influence in media under posts and videos.

Russian President Vladimir Putin has approved new legislation that could see foreign social media companies punished for discriminating against the country’s media outlets. This year, RT and Sputnik have been censored on Twitter.

The bill explicitly forbids censorship based on reasons such as nationality, language, and origin, as well as “in connection with the introduction of political or economic sanctions against Russia.”

Once found guilty, a foreign network, such as YouTube or Facebook, could be subject to sanctions in the form of fines, the slowing down of traffic, or even a complete block.

Earlier this year, US tech giant Twitter took action against RT and other publicly-funded Russian media outlets, subjecting their accounts to a shadow ban. This means that they are now undiscoverable via the website’s search function.

As well as making tweets much harder to find, Twitter also labeled several Russian sources as “state-affiliated media,” despite not doing so for Western equivalents, such as America’s state-run RFE/RL and the British government-backed BBC.

After the bill was proposed, President Putin noted that the country should not “shoot itself in the foot” with any retaliatory actions against foreign media, but it is “absolutely obvious and understandable to any sane person” that these companies are discriminating against Russian outlets. (source)

I love propaganda like this, because of the inherently illogical assumptions it makes and tries to pass off as natural.

Let’s take a better look at this.

First, how does banning foreign companies in Russia who put up critical things about Russia actually help Russia present herself as a ‘defender’ of anything other than blanket Soviet-style censorship?

There is lots of propaganda in the world today, good and bad alike (and some depending on one’s perspective). In the case of the Western world, it is a grave concern that some social media companies block, for example, statements that disagree with a prevailing orthodoxy on certain issues, such as homosexuality or the 2020 election. In this case, we can point to these companies and say they are engaging in censorship that hurts the free exchange of ideas that, while there are good and bad ones, would result in serious imbalances if a real ban was applied to one side.

Russia already has a veritable lock on state media, and people who say anything in media outside of the pro-Putin line get shut down and beat down. Moskovsky Korrespondent, a newspaper founded in 2007, was shut down after writing articles critical of Putin, specifically about his divorce in order to marry Aleksandra Kabayeva. But even being an oligarch and a billionaire in Russia cannot save one from the wrath of Putin and his men, such as when Mikhail Prokhorov suddenly chose to ‘sell’ RBC Media group after pressure from writing about corruption among the circles of Russian power elites, including Putin, to Russian tabloid giant Grigory Berezkin, whose focus is on celebrity gossip.

There is no serious criticism of Putin by any major Russian media source, nor real investigations into his or the behavior of his inner circle, and when such does happen, they are often violently crushed. Meanwhile, they will happily criticize “western decadence” while ignoring the absolutely horrendous rot in Russia whose responsibility is nothing more than resting on those in power.

Ask yourself, how does shutting down Twitter, Youtube, or other Western media sources that say things about or in a way not liked by the Russian government actually help add to a diversity of viewpoints outside those of the Kremlin only? It doesn’t, and in fact, the censorship is arguably worse than what Zuckerberg and Dorsey have done or are doing at the current time.

This same logic, I should mention, is the same kind of logic being pushed by the Republicans who want to abolish Section 230 in the Communications Decency Act, which as I have discussed, is the section that says that websites are able to self-patrol save for egregious legal violations such as child sexual abuse or selling drugs. According to the political right, getting rid of Section 230 somehow will help “the left” balance their criticism of their own rightist views if this is done, yet nobody can seem to explain how this makes sense, because the only thing that abolishing 230 will do is to remove legal protections for websites, meaning that if somebody posts anything that anybody could feel is objectionable, legal or not, that website can be subject to criminal prosecution or civil actions. The result would be that in the name of ‘fairness’, it would destroy free speech.

This logic makes no sense, yet a few whiny, ignorant (both terms are appropriate) conservatives think that destroying the same right that allows liberals to censor them on their own liberal platforms will somehow prevent conservative platforms from being censored or sued out of existence. There is no way to explain how this could not increase the power of government at the expense of the common man at the same time, and yet people will still choose to support it. In this case, these people must want mass censorship, since this is the only possible end it can go towards.

This is what is happening in Russia with this new decree right now. The free intercourse of ideas is not being preserved at all, but rather, it is being stripped completely, and yet it seems there are enough who may think this is a good thing, in spite of the evidence from the last century as to what this particular approach, so loved by the Soviet Union, did in reality, of which the effects are still visible in Russia from Soviet times.

There are many good things to say about Russia, as well as the US, and animosity between them is not necessary. Honesty is, and given the state of the Internet, the world, philosophy, and communications today, mass censorship is not a blessing to anybody except those who desire power at all costs and want to squash any view other than those which they believe legitimize their own power no matter who or what they affect.

But telling me that censorship in the Internet age is about helping freedom of speech? LOL. Likewise, censoring these companies isn’t going to impact their bottom line because Russia is broke and she is only about 141 million people in her nation. Compare that with Japan, whose average annual salary is about 50,000 USD (its about 7,000 US in Russia) and about 125 million people with similar demographic issues. Japan is a far better market that Russia, from a strict economic analysis. Russia can talk about “she makes everything for herself”, but this is only an illusion, illustrated by the rampant poverty, African-tier income levels, and the fact that all Russians, rich and poor, seem to want to leave Russia as soon as possible, else the richest ones would not be purchasing expensive homes and flats in London, Paris, and Berlin.

The Cold War is back, and all its propaganda too.

Call It UBI Or Money Printing, But Something Is On Its Way
Jewish Man Arrested For Hate Crimes After Vandalizing, Burglarizing Four Synagogues In Crime Rampage
Follow