You are here: Home › Call It UBI Or Money Printing, But Something Is On Its Way 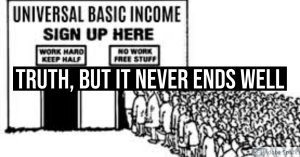 There are a series of competing economic schools for thought today, and one of the long-established contenders has been the idea that one essentially can print ones way to prosperity. Knowing this, and considering the major deficits that the US has been running in addition to the fact that the government has been printing money now in its second issuance, there are some people speculating this may be a long-term justification for a Universal Basic Income, or UBI, distributed essentially in the form of a direct welfare check given to all citizens monthly, as MSN Money reports.

BI is exactly what it sounds like: a government income program which is not tied to recipients’ employment (like unemployment insurance), age (like Social Security), income (like TANF), medical care (like Medicare or Medicaid), or food purchases (like SNAP). It’s simply a monthly cash stipend that goes to everyone. The stipend could be big enough to cover all basic expenses (this is called a full UBI) or it could merely supplement other income (former Democratic presidential candidate Andrew Yang’s proposal of a $1,000 per month “Freedom Dividend” is an example of this sort of partial UBI).

A year ago, when Yang was promoting his dividend, he was a clear outlier in mainstream politics — maybe not entirely outside the Overton Window, but perched precariously on the sill. Surveys in 2017 and 2019 showed a consistent minority of 43 percent were supportive of the idea.

This year, the polling picture is revealingly messy. An August poll by Pew Research Center showed 45 percent support for UBI, statistically identical to the prior year’s 43 percent. But Pew asked about “$1,000 per month for all adult citizens, whether or not they work,” a phrasing I’m guessing raised concerns about mass UBI-induced indolence. A Hill-HarrisX poll published the same month described UBI as a way to “help Americans whose jobs are threatened by automation.” With that framing, 55 percent were in favor of UBI. When UBI is linked to COVID-19, support moves even higher. A Data for Progress survey in April found 66 percent of Americans — including 52 percent of Republicans — were supportive of a $1,000 monthly payment for the duration of the pandemic.

But even for those fiscal conservatives still present in the Republican Party (as well as conservatives and libertarians more broadly), a future of rising support for UBI is plausible. There are already resources for it in this economic tradition: Economist Milton Friedman supported a negative income tax (NIT), which is similar to UBI but scaled to income. (For example, if we set an individual adult income floor of $30,000 per year, those making $0 would receive a $30,000 stipend from the NIT; those making $20,000 would receive a $10,000 stipend; those making $30,000 or more would receive nothing; and progressive taxation would apply only to income in surplus of that initial $30,000.) Charles Murray of the American Enterprise Institute has argued for an annual $10,000 stipend to all Americans (plus $3,000 for health insurance). Libertarian economist and Nobel laureate F.A. Hayek endorsed some sort of UBI too, arguing that the “assurance of a certain minimum income for everyone, or a sort of floor below which nobody need fall even when he is unable to provide for himself” is not only legitimate but “necessary.” (source)

Now there is a lot to unpack in this concept, and it is something worth taking a closer look at in the future. But the essence of any “UBI” is that the government can essentially print their way to prosperity for the citizens, since the issuance of the checks is divorced from a physical means of production.

However, this divorce between the physical and the means of exchange as an abstract-physical concept is absolutely wrong. Money is not generated from nothing, but comes from the exchange of value through natural or manufactured imbalanced. Wealth itself, as well as poverty, are both imbalances that have always existed throughout time, and the idea that one can print money to help ‘level’ equality between persons is fanciful at best and criminal at worst. Christ Himself says that there will always be rich and poor, and if He says this, one should not think oneself wiser than God.

The only real result of such programs would be to further and if done sufficiently, barring any physical rejection or other sort of transfer, regardless of the means by how it happens, would be to destroy the concept of savings and create two classes, that of a majority poor class and a superminority elite class that ‘rules’ over the rest. This seems to be the most logical end of the UBI, that while not elaborating on details (which are of course very important), explains the push for this. If one can abolish most of the concept of money in a society in the historical sense while still retaining control over the majority of assets. Given the right adjustments, it could become impossible to save at all, and buying or selling without oversight of what one is doing may become normal.

What I am saying is that this trend for a UBI is not going away for right now, and there are a number of forms that it could take in the future, eventually leading to its end or to something perhaps very sinister. What exactly happens is yet to be seen, but it is for all to note that there is no real good end it can take because the concept itself is flawed, for one does not print one’s way to success, as wealth must come from actions and need other than running a printing press over and over and holding pieces of paper.