You are here: Home › Did Trump Just Try To Commit Fraud? 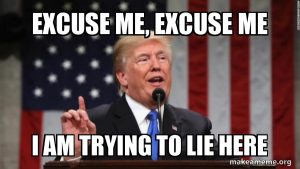 It is noted that given the tremendous questionable patterns of voting behavior, there were a lot of ‘funny’ things that went on in the 2020 election that likely contributed to a Biden victory. This is very wrong, and needs to be investigated because there are many claims, not enough answers, and a lot of genuine concern. However, The fact remains that since such as not happened, Biden is most likely going to become president on January 6th in spite of protests from President Trump.

However, one should remember that “two can play the same game”, meaning that deceitful behavior is not limited to any one party. According to a recent story from Business Insider, President Trump himself was exposed in a phone call pressuring Georgia Secretary of State Brad Raffensberger to change the vote tallies to his favor.

President Donald Trump pleaded with Georgia Secretary of State Brad Raffensperger to “find” additional votes to secure a win in the state’s presidential contest during an hour-long phone call, according to a recording of the conversation obtained by The Washington Post

In the recording, Brad Raffensperger, also a Republican, was subject to a highly intense pressure campaign by Trump, with the president telling the secretary of state that he was taking “a big risk” by not adhering to his demands to overturn President-elect Joe Biden’s nearly 13,000-vote statewide win.

During the call, Raffensperger and a general counsel from his office refuted Trump’s questioning of the vote tally, informing the president that the election was secure and that his allegations of widespread voter fraud throughout the state were false.

“The people of Georgia are angry, the people in the country are angry,” the president said. “And there’s nothing wrong with saying, you know, um, that you’ve recalculated.”

Raffensperger replied: “Well, Mr. President, the challenge that you have is, the data you have is wrong.”
Later in the conversation, Trump asked Raffensperger for help closing his statewide vote deficit.

During the call, Trump, who for months has alleged that mysterious ballots were added to official tallies and targeted Dominion Voting machines that were used in Georgia, refused to let go of the belief that he could somehow change the results.

“There’s no way I lost Georgia,” Trump repeatedly said throughout the call. “There’s no way. We won by hundreds of thousands of votes.”

White House Chief of Staff Mark Meadows and conservative lawyer Cleta Mitchell were also on the line, according to The Post.

Mitchell released a statement slamming the secretary of state’s office, saying that they’ve “made many statements over the past two months that are simply not correct and everyone involved with the efforts on behalf of the President’s election challenge has said the same thing: show us your records on which you rely to make these statements that our numbers are wrong.”

Trump raised his alarms about the Georgia vote tally on Sunday.

“I spoke to Secretary of State Brad Raffensperger yesterday about Fulton County and voter fraud in Georgia,” he tweeted. “He was unwilling, or unable, to answer questions such as the ‘ballots under table’ scam, ballot destruction, out of state ‘voters’, dead voters, and more. He has no clue!”

Raffensperger responded on Twitter, affirming that the allegations were false.

“Respectfully, President Trump: What you’re saying is not true,” he wrote. “The truth will come out.” (source)

Now as I have noted, there are a lot of questions about the voting behaviors and actions, but in spite of this, barring any serious investigation- such as what was denied to the Democrats during the questionable 2000 presidential race in which similar claims in the state of Florida and their lack of investigation gave way to a Bush victory over Gore -the fact is that the vote favor goes to Biden like him or not.

The fact that Trump would call up a Secretary of State and try to pressure him into committing fraud is really bad optics for the Republicans. It doesn’t matter what the Democrats do in a case like this, because the bad behavior is so obvious.

Perhaps, however, as I have noted, this is one of the reasons why the Republican party may have “dumped Trump”, because such behavior, given how quite unhinged and legally dangerous it is, was not so much of a setup, but rather because Trump has become a liability to the party rather than an asset. By dumping him, the Republicans can claim they are going to ‘reform’ their image and get four years to do a full party makeover, while the natural economic and social problems that were building up for a long time get to become the problem of Biden and the Democrats. If the Republicans had won, they would have the White House for four more years, but also the bad image that Trump has set and all of the anti-Republican sentiment, which could have put the party down the pathway of the Whigs.

This is the reason why I kept saying that the real winner of the 2020 election is the loser. The Republicans won the election, because they get a fresh makeover, while the Democrats, though they have won the election, have also lost because they get to deal with the problems. This is the trend that so few want to discuss, because of the narrow minded approach that so often defines contemporary American politics.

This phone call, however, may spell bad news for Trump, since while I am not a legal expert, it seems awfully like he is trying to use his position of authority to pressure another person to commit a crime. This may in combination with the general dislike that people have for him now result in Trump facing legal action for this and a multitude of other issues.

On a formal note, Secretary of State Raffensberger deserves much respect and congratulations for not capitulating to Trump’s threats. Love or hate Trump or Biden, the fact is that what he said was correct- it is not his position to falsify votes for anybody, but to count, and to leave disputes to the courts where such problems belong. Trump’s threats against Raffensberger for his re-election thus only work to Raffensberger’s favor, since in a time when people are bemoaning honest public servants and corruption in government, what happened here was, from what it seems, and attempt by Trump to engage in corruption, and Raffensberger being an honest public servant, doing his job and standing up in the face of pressure.