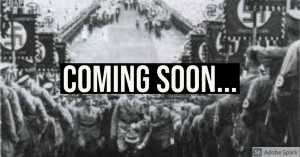 National Socialism is on the rise in Europe, and this is going to remain a trend for the future as Germany seeks to re-assert herself as the ‘dominant power’ on the Continent. As such, while there have been for a long time strains in this direction, one is going to see them increase in the future.

Shoebat.com has documented how many groups and even cults promoting this ideology have been found and shut down by police, and even how in one particularly interesting case in Germany, one of these circles existed among the Northrhein-Westphalia police involving dozens of officers and higher-ranking personnel. Thus it is with interest that the Daily Beast reports how three men have been arrested by Spanish police as part of a National Socialist cult, one English and two German, for trafficking firearms from Eastern Europe, modifying them, and selling them on the Black Market.

When police raided a warehouse in Andalusia, Spain, last week, they found more than the illicit gun running enterprise they knew they’d cracked. They also found a Third Reich shrine, complete with male and female mannequins dressed up in pristine Nazi uniforms, portraits of Adolf Hitler on the walls, and rare emblems and medals from the Nazi era.

Police arrested a British man and two Germans on the site who were modifying weapons bought in eastern Europe for resale, including scraping off serial numbers and amping up automatic capabilities with the aim of selling them to drug traffickers across Europe, according to the Spanish Civil Guard. The three men were also charged with drug trafficking and falsifying documents.

In addition to the cache of 160 firearms—including 22 AK-47 assault rifles, eight submachine guns, 121 short weapons including pistols, eight silencers, 10,000 bullets, and a grenade with 1.5 kilograms of explosives—they also found doctored gun licenses and other falsified documents, according to a statement by Spain’s Civil Guard. Some of the weapons were already packed up in hermetically sealed bags to be delivered. (source)

Where were these guns going? What connections did this group have? Could there be a lot more to this story than what it seems? It is almost certain that the answer to the latter question is yes, but the details are unknown at this point.

What we can say is that the “post-World War II world” spoken of by so many is ending. It is the end of an era, the end of the ‘American era’ or perhaps ‘pax Americana’, and the world is returning to her old ways of fighting and even violence, and horrible violence too. Europe is close to ripping herself apart again, and groups such as this National Socialist cult should not be looked at as fringe, but a reflection of the inner thoughts of many, who want to see a revival of not just the past, but all things of paganism and that which Christianity came to get rid of and get under control.