You are here: Home › China Relies On India For Rice As She Threatens War Against Her 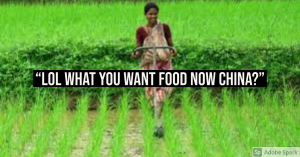 If you want to go to war with somebody, you don’t rely on that person for your food, tools, or anything else you may need, because if you are fighting with that person, he will stop sending you what you need. It’s generally a rule throughout history that this happens.

I have pointed out before that for all of China’s talk and war-like actions, she is far from being able to win, especially since she relies on the US and Western Europe, both who do not like her, for a large number of her pork and soy imports, and no matter how much she is working at diversifying from the US, her reliance is still for the foreseeable future so great that all the US has to do is cut off food supplies and China will not be able to eat, and hungry soldiers or people make for bad defenders of their land.

Now another story has come to my attention, reported by Zero Hedge, that China is so desperate for food that in spite of her attempts to corner agricultural markets in southeast Asia, she is forced now to buy rice from India, who she has been seriously talking about war against and even had a major military skirmish with in which 40 Chinese soldiers were killed in the Himalayas.

As Rithesh Jain from the World out of Whack blog writes, citing an article in the Reuters, “Vietnam, the world’s third biggest exporter of rice, has started buying the grain from rival India for the first time in decades after local prices jumped to their highest in nine years amid limited domestic supplies.”

“For the first time we are exporting to Vietnam,” B.V. Krishna Rao, president of the Rice Exporters Association, told Reuters on Monday. “Indian prices are very attractive. The huge price difference is making exports possible.”

This means that, as we have been warning for the past few months, food inflation is indeed back with a vengeance:

The purchases underscore tightening supplies in Asia, which could lift rice prices in 2021 and even force traditional buyers of rice from Thailand and Vietnam to switch to India – the world’s biggest exporter of the grain.

In December, the world’s biggest rice importer China started buying Indian rice for the first time in at least three decades due to tightening supplies from Thailand, Myanmar and Vietnam and an offer of sharply discounted prices.

What happens next? Nothing good:

Chronic and acute hunger is on the rise, impacting vulnerable households in almost every country, with the COVID-19 pandemic reducing incomes and disrupting supply chains, according to the World Bank.

As Jain concludes, “food inflation is here and unlike base metals, agricultural items can be substituted leading to rise in the entire agri basket.” The following charts from Goldman show just how close we are to a rerun of the global “Arab spring” we are again. (source)

China and India are both incompetent and large, and any conflict between them would likely be a battle over who is the greater fool. However, that India- a nation with a billion people -is selling rice to the Chinese to feed their people, is a very bad sign for China.

You can’t fight the people who you rely on for food. It just never ends well. Yet this is what China is inclining towards- going to war against her enemies who also happen to be her food producers.

China is a power, but she is far from being ready for a global conflict. That is, unless one is ready to have tens and perhaps hundreds of millions of dead Chinese civilians, which of course, would likely not lead to victory for the Chinese, but another turning of the revolutionary cycle as it has happened so often in Chinese history.