You are here: Home › Claim: 750 Christians Massacred By Ethiopian Forces At Major Church In Tigray 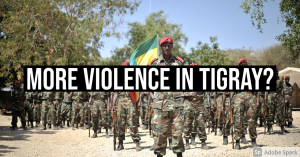 Because of the remote location and practical media blackout enforced by the government, information has only emerged in small amounts about the ongoing Tigrayan conflict in Ethiopia and Eritrea. So far thousands have died and millions have been displaced.

Now according to Eritrea Hub, a claim has emerged that 750 Christians were massacred by government troops at St. Mary of Zion Church, one of the major churches for Ethiopian Orthodox Christians.

On Tuesday, 15th of December, Ethiopian federal troops and Amhara militia approached the Mariam of Zion cathedral in the Tigrayan city of Aksum. It is possible that they thought that Tigrayan troops were sheltering in the church – taking advantage of the ancient right of sanctuary. According to a number of sources the church was full, with some saying that up to 1,000 people were in the building or the compound surrounding it.

The advancing soldiers caused consternation: a chapel in the compound is believed by Ethiopians to house the biblical Ark of the Covenant. Only a monk – appointed as its guardian – may see it. There was a huge commotion. Amhara soldiers are reported to have shouted that “the Ark belongs in Addis Ababa!” but this cannot be confirmed. Those inside the cathedral came out to try to defend the sacred object.

A confrontation ensued. Everyone in the compound was forced into the square outside the cathedral. As the crowd milled around, there was further shouting and the troops opened fire on the protesting crowd. As many as 750 people are reported to have been killed.

News of the massacre has only gradually reached the outside world. People walked over 200 kilometres to the regional capital, Mekelle, and from there the story gradually filtered out – despite the clamp-down on the media in Tigray.

News of the massacre follows confirmation by the Ethiopian authorities that one of the most sacred Islamic sites, the Nejashi Mosque in the town of Wukro, had been badly damaged in fighting.

It was built in the 7th century by the companions of the Prophet Mohammad, some of whom are buried at the site.

The Ethiopian government accepts the damage took place, and promises to restore the building, which is one of the oldest mosques in the world.

The government say it was attacked after Tigrayan troops dug trenches around the mosque.

Independent journalists are being prevented from visiting the Tigray region – the site of a fierce conflict between Tigrayan fighters and Ethiopian and Eritrean troops, supported by Amhara militia. (source)