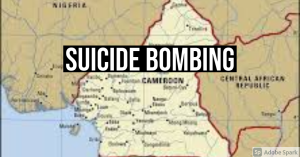 Fifteen people have been pronounced dead following a forced suicide bombing from the terrorist group Boko Haram in Cameroon as the Christian Post reports. I say ‘forced’ because the ‘suicide bomber’ in question was a small girl, likely sent to her death by other adults.

A small girl, used by the terrorist group Boko Haram, blew herself up in the middle of a crowded park in northern Cameroon, killing at least 15 people, according to reports.

The suicide bomber blew herself up in a public park in the town of Mozogo in the Mayo-Tsanaga area of Cameroon on Friday. Five children between the ages of three to 14 were among the victims, according to UNICEF.

Before the explosion, Boko Haram men entered the town and shot sporadically throughout the area, the U.S.-based persecution watchdog International Christian Concern said. Many villagers ran to the park to hide, not knowing that Boko Haram had a girl wearing a suicide vest inside the park.

“I continue to be deeply concerned about the increasing number of attacks against civilians in the Far North, North-West and South-West regions of Cameroon,” UNICEF Executive Director Henrietta Fore said in a statement. “The rise in violence has exacerbated a national humanitarian crisis and there are now an estimated 3.2 million children in need across the country.”

It is unclear if the young girl voluntarily blew herself up or was forced by Boko Haram.

ICC added, “Despite all four of these nations working together as a coalition, they have been unable to quell the rise of Boko Haram,” warning that the group that had its peak in 2015, but lost much of it in 2016 and 2017, “has been re-growing.”

Throughout the English-speaking Northwest and Southwest regions in Cameroon, some farming communities are supportive of rebel groups that began fighting for independence in 2017 because they feel underrepresented by the French-speaking central government. (source)

The FBI Warns: Right-wing Paramilitaries Are Planning On Breaching The Capitol Buildings Of All Fifty States
Claim: 750 Christians Massacred By Ethiopian Forces At Major Church In Tigray
Follow