You are here: Home › Round Two As Trump Faces Second Impeachment Vote 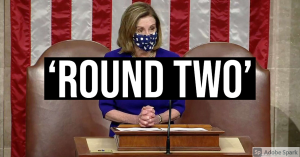 Things are not looking good for Trump. In a update to the current news, it appears that Congress is moving forward and has finalized a historic second impeachment of President Trump.

Abandoned by some in his own party, Trump could do nothing but watch history unfold on television. The suspension of his Twitter account deprived Trump of his most potent means to keep Republicans in line, giving a sense that Trump had been defanged and, for the first time, his hold on his adopted party was in question.

With only a week left in Trump’s term, there were no bellicose messages from the White House fighting impeachment and no organized legal response. Some congressional Republicans did defend the president during House debate in impeachment, their words carrying across the same space violated by rioters one week earlier during a siege of the citadel of democracy that left five dead.

It was a marked change from Trump’s first impeachment. That December 2019 vote in the House, which made Trump only the third president ever impeached, played out along partisan lines. The charges then were that he had used the powers of the office to pressure Ukraine to investigate his political foe, now-President-elect Joe Biden.

The team around Trump is hollowed out, with the White House counsel’s office not drawing up a legal defense plan and the legislative affairs team largely abandoned. Trump leaned on Sen. Lindsey Graham, R-S.C., to push Republican senators to oppose removal. Graham’s spokesman said the senator was making the calls of his own volition.

Trump and his allies believed that the president’s sturdy popularity with the lawmakers’ GOP constituents would deter them from voting against him.

The president was livid with perceived disloyalty from McConnell and Cheney and has been deeply frustrated that he could not hit back with his Twitter account, which has kept Republicans in line for years. Trump was expected to watch much of the day’s proceedings on TV from the White House residence and his private dining area off the Oval Office.

His paramount concern, beyond his legacy, was what a second impeachment could do to his immediate political and financial future, according to four White House officials and Republicans close to the West Wing. They were not authorized to speak discuss private conversations and spoke on condition of anonymity.

The loss of his Twitter account and fundraising lists could complicate Trump’s efforts to remain a GOP kingmaker and potentially run again in 2024. Moreover, Trump seethed at the blows being dealt to his business, including the withdrawal of a PGA tournament from one of his golf courses and the decision by New York City to cease dealings with his company.

A White House spokesman did not respond to questions about whether anyone in the building was trying to defend the president. (source)

Remember, this is a trend that is not about the president. It is about the common man.

If the president of the most powerful nation in the world can be impeached twice, get blacklisted, and face complete personal and social ruin, no man is safe. It also sets a standard for the world to look upon that could enable those of ambitious tendencies to do the same but have not yet been able to get the courage or overcome the fear to realize such. But the past week’s incidents and events may empower this.

Expect to see an increase in the years to come not just in political violence, but in political repression of potentially historic- at least for modern times -proportions that take inspiration from the examples of events in the US as well as what seems to be a power vacuum opening up as the US loses the nature and extent of her previous economic and political hold.

The era of ‘Pax Americana’- just a did with the era of ‘Pax Romana’ -is coming to an end. History shows what happened to Rome and the world when Rome ended, and so one must expect that a similar series of events may also transpire.

It should not be a surprise that tribalism is returning, for as the Roman Senate was gathered and fighting, the barbarian tribes closed in.

Emphasis on barbarians, for the trends of history are dangerously close to repeating again. Meanwhile, the political reality show continues on- until it stops.