You are here: Home › EU Certifies Bugs For Human Consumption 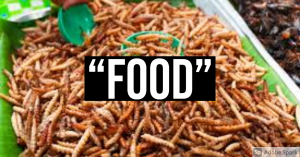 I have noted that “eating bugs” in the literal sense is being pushed and will likely become a reality in the next decade or two, following not any real ‘meat shortages’ at all, but rather the advancement of a philosophy that subjugates the majority of the people to a small minority.

Having noted this, the Wall Street Journal reports that now the EU has suddenly legalized the consumption of insects as food.

Insects are inching their way to becoming a menu item on European dining tables after the bloc’s food safety regulator approved mealworms as safe for human consumption.

Wednesday’s announcement means the grubs—actually beetle larvae—could soon be ground down and used as a protein-rich flour to make pasta and bread, or consumed whole in stir-frys and other recipes. The next steps involve getting marketing and labeling approvals, and for the European Commission to sign off on the European Food Safety Authority’s decision.

The ruling provides a lift for companies such as Micronutris, a French edible insect farm which filed the application, and other startups including AgriProtein of South Africa, Netherlands-based Protix, and another French company, Ynsect, which is building a new farm with production capacity of more than 100,000 tons of bugs a year.

“There are clear environmental and economic benefits if you substitute traditional sources of animal proteins with those that require less feed, produce less waste and result in fewer greenhouse gas emissions,” said Mario Mazzocchi, an economic statistician at the University of Bologna.

It will likely take some time before eating insects becomes as widespread as in ancient Rome or in present-day Thailand, where grasshoppers and other bugs are fried and prized for their nutty flavor. (source)

it is an odd trend, or so it would seem, but one worth watching, as the world moves away from religion and in an attempt to deify itself, it creates the same problems of the ancient world, but in a more complete and dangerous way.

Over 200 Priests Have Been Killed By Coronavirus In Italy
Print, Grandpa, Print
Follow