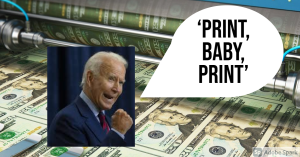 The phrase “Drill, baby, drill” was not first said by but was popularized by Sarah Palin during the 2008 presidential debates. In a modified version of that, and citing how I have repeatedly noted that the Federal Reserve Bank wiht the government is going to print much more money in the future and the Biden, now having assumed the presidency, has no choice but to do this, the saying will become “print, grandpa, print” as President Biden declares that he is planning to print a third round of stimulus checks of at least $1,400 dollars.

President-elect Joseph R. Biden Jr. on Thursday proposed a $1.9 trillion rescue package to combat the economic downturn and the Covid-19 crisis, outlining the type of sweeping aid that Democrats have demanded for months and signaling the shift in the federal government’s pandemic response as Mr. Biden prepares to take office next week.

The package includes more than $400 billion to combat the pandemic directly, including money to accelerate vaccine deployment and to safely reopen most schools within 100 days. Another $350 billion would help state and local governments bridge budget shortfalls, while the plan would also include $1,400 direct payments to individuals, more generous unemployment benefits, federally mandated paid leave for workers and large subsidies for child care costs.

“During this pandemic, millions of Americans, through no fault of their own, have lost the dignity and respect that comes with a job and a paycheck,” Mr. Biden said in a speech to the nation on Tuesday evening. “There is real pain overwhelming the real economy.”

He acknowledged the high price tag but said the nation could not afford to do anything less. “The very hea9lth of our nation is at stake,” Mr. Biden said, speaking from Delaware. “We have to act and we have to act now.” (source)

This is not an accident. Third check? Wait for the fourth, fifth, and beyond, because this is part of a larger trend.

The fact is, as I have stated, the federal government cannot stop printing once they have started because if they did, it would cause a political catastrophe, even though it would be the best thing for the economy.

Yes, the US economy is falling apart. This is not good, but it was going to happen. It was in the works for a very long time. That said, one’s best option is not to expect “free money”, but to prepare for the future, and to continue to make good decisions now so to weather what is coming and will affect all people, given the fact that the US dollar is the backbone of the world’s currency system.