You are here: Home › Pastor Curses Those Who Did Not Support Trump From The Pulpit 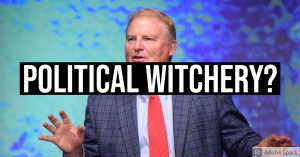 Perhaps the most concerning trend developed over the Trump administration was the obsession with political ‘cults of personality’, something that has generally disastrous consequences no matter what the situation. In the case of the US, it showed people having an abnormal like of and pastors willing to give an abnormal level of support for Trump.

Now, in an interesting story reported by the Christian Post, one pastor in under fire for ‘cursing’ people who voted against Trump.

Several pastors have spoken out against a Kentucky megachurch pastor who during a worship service Sunday cursed those who “stole” the 2020 election from President Donald Trump in the name of Jesus.

In another apparent clip from the service, Rodgers, who is also president of Word Broadcasting Network in Louisville and co-hosts a Christian program called “Word Alive” with his wife, Margaret, said he was told personally by an angel that Trump would have won the election.

“I had an angel come to me and tell me that Trump was going to be the next president,” he said in the clip that could not be independently verified by The Christian Post. “And to be honest, he probably had the biggest landslide victory in the history of America. But that doesn’t mean we are wrong. It means it isn’t over yet.”

A group of Louisville pastors who heard the sermon, however, are now speaking out about the dangers of Rodgers’ message in the wake of a deadly attack on the U.S. Capitol in Washington, D.C. by Trump supporters last Wednesday. The storming of the Capitol delayed for hours the counting of the electoral votes and lead to the deaths of five people. President-elect Joe Biden was later confirmed as the victor of the 2020 election. (source)

Thankfully there are other pastors who have opposed this, but the principle and trend is just as dangerous. Likewise, the political left is no different, and has been and will likely continue to so the same in their context.

Passion is OK. Disagreement is OK. But when those disagreements take on a life outside of their particular contexts, they can become dangerous, not just to individuals, but to society as a whole, since they threaten the stability of people to get along with each other, and such is often a precursor to violence.