By Andrew Bieszad on January 18, 2021 in Featured, General 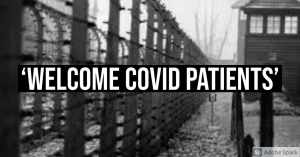 When one speaks of “concentrating” any groups of people into a particular location that are generally disliked in the context of historically Germanic lands, it not surprisingly causes many people to become uncomfortable. Shoebat.com reported in 2018 how Austria curiously wanted to ‘concentrate [migrants] into one spot’ through the camps, and how many of the migration centers have been hotspots of violence as well as hated by many natives living in Germany or other parts of Europe. Without intending to exaggerate, as these areas are camps where people are concentrated, one might say they are a sort of ‘concentration camp’.

Now Germany adds more interest to this by saying that she has asked her different federal states for how to handle COVID rulebreakers, and according to Die Welt and reported on by the New York Post, some German state are going to be concentrating COVID quarantine rulebreakers into migrant camps.

Germans who repeatedly refuse to quarantine after being exposed to COVID-19 will be held in detention centers — and even under police guard, according to reports.

Officials in the state of Saxony — which is experiencing one of the worst outbreaks in the European nation — have already approved plans to hold quarantine-breakers in a fenced-off section of a refugee camp, the Telegraph said.

Another state, Brandenburg, also plans to use a section of a refugee camp.

In Schleswig-Holstein, repeat offenders will be kept in a special area in a juvenile detention center, the report said, citing Germany’s Welt newspaper.

The state of Baden-Württemberg has two hospitals with rooms to hold the scofflaws, which will be guarded by police, the report said.

The centers are aimed at detaining only those who continue to break lockdown even after being fined, the report said.

States have been granted powers to do so under the disease protection act, an emergency law that was passed by the German Bundestag in March and renewed in November, Dr. Christoph Degenhart, an expert in administrative law, told Die Welt. (source)

Three of the areas noted in the report that are going to do this concentration into refugee camps- Saxony (Sachsen), Brandenburg, and Schleswig-Holstein -are in eastern (the former two) or northernmost (the latter) Germany. An interesting observation, since the first two are historically part of East Germany and have very strong anti-migrant sentiments (the major 2018 pro-nationalist protests that Shoebat.com reported on happened in Chemnitz, for example), and the latter is on the border with Denmark, which as Shoebat.com reported on many times not only has long-standing ties to the anti-Islam, anti-immigration, and nationalist movements, but also is the nation where migrants were being transferred to a ‘camp’ on an island that also had a ‘disease research’ facility.

Now I cannot say what is going to happen in the future. What I can say is that the lessons of history give anyone cause for concern if one looks at Germany’s past, especially the recent past, because nations are made of people, and it was not long ago that the US and Germany were at war, or that Aktion T4 was not something in a book, but an actual program still in effect.

Ask oneself, what does concentrating sick people (COVID patients) in with a bunch of foreign migrants in a tight area going to do? The only logical conclusion would be that it would put the migrants- many who likely have weakened immune systems from travel and stress -at an elevated risk of COVID, and given the close living quarters, plus the inevitability that some will get sick, it only seems to ensure that the disease would spread like a wildfire among them

This is objectively speaking at terrible thing, but from the viewpoint of one who hates the migrants and wants to use them as a tool of political manipulation, what could be better than being able to accuse, perhaps to use their language, ‘MILLIONS OF DISEASE-RIDDEN RAPIST MIGRANTS WHO WANT TO ROB, INFECT, AND DESTROY OUR HEIMAT’? It is too perfect of political propaganda, and too useful in the hands of a skilled manipulator.

A trend to look for will be ‘migrants’ getting COVID, and following this recent decision, to see if migrant camps in those regions in Germany- Saxony, Brandenburg, and Schleswig-Holstein -see increased numbers of COVID cases in the migrant camps. If this happens, then look immediately to nationalist propaganda to see what they will say about the migrants, but remember this story, because if history is a lesson, there is an above-average chance that the German government is not doing this because of stupidity, but out of malice owing to the fact that she wants to generate political tension so she can justify her attempt to rise to world power once again, even if it comes at the cost of millions of suffering people.