You are here: Home › Parler May Be Back Online With Russian Help, And Explaining How This Works Geopolitically 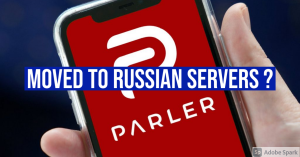 With lots of talk about Russia and “collusion” over the last four years, and some of it reasonable and other parts not so, it is of interest that ThomsonReuters reports that Parler, the social media alternative which many ‘conservatives’ seem to be attracted to, is allegedly migrating to Russian-backed hosting, at least in part, in order to get herself back online.

Parler, a social media website and app popular with the American far right, has partially returned online with the help of a Russian-owned technology company.

Parler vanished from the internet when dropped by Amazon Inc’s hosting arm and other partners for poor moderation after its users called for violence and posted videos glorifying the Jan. 6 attack on the U.S. Capitol.

On Monday, Parler’s website was reachable again, though only with a message from its chief executive saying he was working to restore functionality.

The internet protocol address it used is owned by DDos-Guard, which is controlled by two Russian men and provides services including protection from distributed denial of service attacks, infrastructure expert Ronald Guilmette told Reuters.

If the website is fully restored, Parler users would be able to see and post comments. Most users prefer the app, however, which remains banned from the official Apple Inc and Google stores.

Parler CEO John Matze and representatives of DDoS-Guard did not reply to requests for comment.

Last Wednesday, Matze told Reuters the company was in talks with multiple service providers but declined to elaborate.

DDoS-Guard has worked with other racist, rightist and conspiracy sites that have been used by mass murderers to share messages, including 8kun. It has also supported Russian government sites.

DDoS-Guard’s website lists an address in Scotland under the company name Cognitive Cloud LP, but that is owned by two men in Rostov-on-Don, Russia, Guilmette said. One of them told the Guardian recently that he was not aware of all of the content the company facilitates.

Parler critics said it was a potential security risk for it to depend on a Russian company, as well as an odd choice for a site popular with self-described patriots. (source)

I still don’t like Parler, because of the terms of service. Until the problems that I and many others have elaborated on that expose her users to legal repercussions are fixed in their “agreement”, I do not recommend anybody of any political persuasion have anything to do with them, as all it takes is one wrong post at the wrong time seen in the wrong context by the wrong person in the wrong way and you can lose your assets.

But that aside, I would like to briefly discuss why this website may be hosted on a Russian server, and the answer is not anything about ‘security’, but it is instead that it HAS to be if it is to function.

As I have stated before, think of the world in terms of “blocs”, be it politics or race or economics. Everything can be divided this way, because while all people are individuals, certain groups share common characteristics, and while they are not “uniform”, they are unified by given characteristics and therefore they form a bloc that has interests and goals particular to them that even if different on other issues must inevitably converge on these one in a particular context. Doing this is not about “stereotyping” people at all, but rather, it is necessary to do in order to manage processing diverse variables. Computer programmers and algorithims do this all the time by necessity, since it is the only way that the “calculations” they make can be performed.

The “Anglosphere”, or as Carroll Quigley described it, the “Anglo-American Establishment”, constitutes all of the “Five Eyes” intellgence program nations (US, UK, Canada, Australia, New Zealand) and can include their former colonies, at least in part. Generally speaking, these nations share a common history, and also a common politics. This is especially true when it pertains to Internet laws, and therefore, these nations will tend to mutually enforce various “claims” made by other fellow nations. .

The next tier are the nations of Western Europe. However, there is much more flexibility in this area, since they may or may not choose to agree with the Anglosphere’s conception of laws. Germany is a prime example of this, because while they have a long history- and arguably closer one -with England because of the shared “Saxon” heritage, Germany will also viciously fight with England about most ways for how to run economic and political systems. A modern example of this are the various laws pertaining to copyright infringement, as Germany will refuse to enforce American legal claims against their citizens on this matter. Sweden until recently was the home of the largest piracy repository in the world, and while it stopped this due to American pressure, it still remains a major center of such activity.

The next tier are most nations anywhere else in the world, with the notable exception of Japan, as due to her relationship with the US, straddles a place between this and the previous tier. There are variations within this tier, and often it depends on the political inclinations of the nations they reside in, but many things in these websites are allowed that are not in the first tier. For example, a website in Thailand might allow hosting that is not allowed in the US, but hosting that criticizes the Thai king or any of his family or personal interests would be aggressively shut down and the host potentially jailed if living in Thailand. As noted, this includes most nations in the world. An Islamic nation as an example may allow many things, such as Pakistan, but host a website in Pakistan that criticizes Islam, and one may have to migrate to servers very quickly in India.

The last tier are the most questionable, and these are nations that could also be called “nations?”. These are mostly island nations throughout the world, and may have relations with colonial powers but are often not or don’t care about such laws from the past, or even their own, and are a very much “anything goes” when it comes to web content, used to host websites that sometimes cannot be hosted anywhere else for legal reasons. One of the earliest Internet examples of this was the infamous “goatse” shock site, which was just a photo of a man having pulled open and exposed his heavily prolapsed anus, as because of the sodomy and obscenity laws in many nations, was intentionally hosted on servers for Christmas Island (.cx). Sometimes this can also include nations in Africa or parts of Asia that are not island nations (Liberia, for example). As one might imagine, when it comes to sites hosted on the “clearnet”, while they host many legitimate websites, they generally seem to be the most inclined to host the most illegal or immoral content.

There are exceptions as well within these tiers. China, North Korea, and Turkmenistan are so repressive that very little outside of an official government “line”, even of a nature that is not necessarily bad, is generally banned. Some nations allow anything to be hosted, but the infrastructure needed to support connections does not exist or is in constant danger of being taken offline because of political fighting that leads to communication shutdowns for all of the nation, such as a website hosted in Somalia. The status of other nations being able to connect to the Internet depends heavily on economic, social, as well as political factors.

Russia falls firmly into the third tier above. She will enforce laws related to narcotics or child abuse (although both cases are often done for political optics and there is much less enforcement than in the US), but she will also routinely host content not allowed in other nations, especially the US. Much of this seems to be done as a direct attempt to spite the US, for political reasons, because Russia generally will not enforce America claims as much as she generally does not extradite political refugees to the US from her. Likewise, because Russia is still a serious power, even in her severely weakened state, she has enough of the infrastructure, money, manpower, skills, logistics, and perspective in order to run high-quality communications necessary to handle large volumes of Internet traffic, even as Roskomnadzor (the Russian bureau of censorship) increasingly in seeking to isolate access to large parts of the ‘free Internet’ by Russian citizens in the name of nationalistic desire.

If Parler has truly opened on Russian servers, this above is the reason why. It has nothing to do with “Russian spying”, “right-wing collusion”, or anything of a conspiratorial nature in the objective sense, but purely for logistics. Again, I am also saying that multiple levels of interest may not exist. Rather, I am saying that if one has a website with a large base, such as Parler, that gets shut down by major US web hosting companies, the next most logical step for that person to do in seeking a foreign host for his site would be Russia since they have the ability to reproduce mostly or fully the functions found in the US but without the same levels of poltical censorship in an American context that would enable them to stay online and not be taken down.

This is not to say that going to Russia would mean a free-speech panacea would result. Russia as noted has her own censorship bureau and has become rather aggressive. Thus posts such as “Putin is a(n) [insert choice of insult or criticism here]” may be removed and a user banned for saying them, as well as supporting in any way ideas not liked by the Russian government. There is no such thing as absolute “freedom” in the sense of anarchy, because inevitably chaos would ensue, and so even a small number of laws has to exist in order to prevent total breakdown.

It will be interesting to hear what the public response to this is should it be proven conclusively that Parler is now on Russian servers. However, it would not be a surprise, nor even something to worry about or conspiratorial, but a natural progression of events in the most logical order, because if a company is going to be for all practical purposes in the US ‘blackballed’ for political reasons, then the political enemy of the US is the friend of that particular company, and not for hatred of the US, but to avoid the laws preventing it from operating, and what is more American than outsourcing for cheaper labor or in the words of many a defender of corporatism, “better conditions for business” that from one’s home nation?