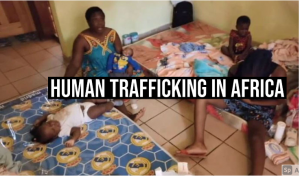 Human trafficking can assume a variety of forms, but it is found throughout history and is not a new idea. From ancient times to now, call these people slaves, servants, prostitutes, soldiers, or just people who want to have a child and cannot have one for any number of reasons, or something else, such things are a reality of life. Thus people who criticize the existence of such things not only are denying what is a real problem in the act itself, but something that is an old evil and has to be constantly addressed, as it is a human problem and thus transcends race, culture, and periods of history.

Such a ring was recently discussed by Voice Of America broadcasting, in which a Cameroonian man was arrested and in the course of his arrest proceeded to expose a massive human trafficking ring where mothers have been selling their babies and children to buyers in Congo.

Cameroon police said Saturday they have opened investigations into a network of traffickers who allegedly buy babies from the central African state to sell in the Democratic Republic of Congo. Some members of the network, believed to have illegally sold scores of children, were arrested Saturday in Cameroon’s capital, Yaoundé, with babies they had bought and a mother who said she wanted to sell her unborn child because she is poor. The mother was also arrested.

Baudouin Gweha, senior official of the Gendarmerie post at Mimboman, a Yaoundé neighborhood, says he arrested 41-year-old Pierre Essola for carrying out an activity that violates human dignity.

Essola tells Cameroon police that all negotiations with potential buyers and sellers of babies are by telephone.

He says he found a Congolese woman on social media who was offering to help teenage and single mothers to take care of their newborn babies. He says he immediately contacted the Congolese women through WhatsApp and told her that many young girls with unwanted pregnancies in Cameroon need help. He says he recorded and sent videos of poor teenage mothers to the woman in Congo. He says while in Cameroon, the woman disclosed to him that she had another partner who helps her to buy babies from the coastal Cameroonian city of Douala.

Essolla said his intention is to help poor mothers, especially teenagers who abandon their babies on the streets because there is no one to help take care of the babies.

Cameroonian police report that last year, several hundred children were abandoned on the streets by poor mothers. At least two dozen babies were either killed or found dead after their mothers abandoned them.

Gweha says Essolla is part of a network that sells Cameroonian babies in the DRC.

He says among those already arrested is an online trafficker who facilitates the buying and selling of newborn babies.

He says the Cameroonian police have also arrested two mothers who sold their babies, two women from the DRC who bought babies, and a babysitter the women paid to take care of the newborns in Yaoundé. He says the four babies recovered from the traffickers have been handed over to the Chantal Biya hospital in Yaoundé for medical follow-up and care.

Gweha said the buyers paid $2,000 for a 1-day-old baby who was still very fragile and $6,000 for children that were healthy and more than 3 months old.

Gweha said it was not the first time the women from the DRC bought Cameroonian children, but said that because of the investigation, he could not reveal the identities and towns of origin of the Congolese women. (source)

The situation is sad, but it is also revealing. These things take place in Africa, but thankfully, it seems that there is a willingness to discuss such actions and even potentially address them in Africa, whereas to make a like statement about other nation is not always the case.