You are here: Home › Church Attacked For Espousing Traditional Christian Views On Sodomy 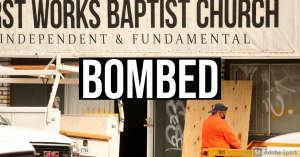 Shoebat.com has maintained since her inception the teachings of the Church about sodomy and the LGBT, which has angered a great number of people. Thankfully, the views are not particular to our own inclinations, but are the teachings of the Church’s Magesterium that while not always enforced or sometimes even denied by people, are not able to be changed and remain in effect, for one cannot change them in as much as one cannot change the law of gravity, for even if a man was to deny the existence and make laws that a person who asserts the existence of gravity is a criminal, the fact is that if a man was to jump off of a building, he would still plummet to his inevitable death because of gravity.

Thus it does not matter how may ‘pastors’ or errant priests and errant bishops speak to the contrary, because divinely revealed truth is measurable, clearly able to be articulated and communicated, and does not depend on any individual person because it exists outside of them. Sts. Athanasius, Gregory Nazianzen, and Nicholas during the days of the Arian controversy, were part of the sub-25% minority of Christians, priests, and bishops who asserted the fundamental reality of the Trinity, yet the existence of the Trinity did not change because of the lack of support. The principle here is no different, except the issue is that of Sodom instead.

However, opposing the sodomite agenda has come at a lot of risk. Shoebat.com has been harassed and threatened for upholding dogma on this issue, and as we have pointed out, because a supermajority (approximately 93% according to my calculations based on data extrapolation, since there is no clear study on the issue) support sodomite behavior, those who stand against it become targets of public hatred to the point of violence. We have noted the possibility of a trend, based on the current social and political trends, that violence against Christians may take place by those who want to ‘defend’ or ‘asset’ the LGBT agenda. According to the Sand Diego Valley Tribune, such seems to have happened as a Baptist church with a history of opposing sodomitic behavior was bombed.

An El Monte church that was threatened this month with an arson attack over its extremist views and condemnation of same-sex marriage was damaged early Saturday, Jan. 23, when someone threw a bomb at the building, blowing out windows.

No one was injured in the explosion, FBI spokeswoman Laura Eimiller said. The First Works Baptist Church at 2600 Tyler Ave. was also vandalized, the El Monte Police Department said.

The FBI is investigating the attack, which it said involved “an IED,” or a homemade or “improvised” explosive device.

“As to the question of whether this was a hate crime, that’s always going to be considered among the theories when a house of worship is attacked,” Eimiller said of the blast. “But it would be premature to confirm any motive at this time, and we are not ruling any other motive out.”

El Monte police heard the explosion at about 1:15 a.m.

“When our units arrived at the scene they found that (the church) … was having some smoke come out of the windows,” Lt. Christopher Cano told reporters. “It appeared that the walls to the church had been vandalized as well as all the windows. (The windows) appeared at first to be smashed, then we realized that the windows were not smashed, that they had actually blown out from some type of explosion.” (source)

Now the person or group involved in this is yet to be identified. There also could be multiple reasons, and there are questions, such as why was the bomb detonated at 1 AM, clearly at a time when it would seem to be very unlikely that it would kill somebody? This is not to hope for the worst, but assuming a man has intentions malicious enough to actually bomb a church, one would think he would do it because he hates the people who go there, and wants to see them die as well (I am reminded, for example, of the 16th Street Baptist Church bombing in 1963 during the Civil Rights era).

Shoebat.com has expressed that as political tensions rise, this decade will see escalation possibly to the point of public violence. As such, since the sodomite issue is religious as well as political, it is entirely possible to see an increased trend of violence against Christians in the name of doing a ‘social good’ or ‘fighting against discrimination’.