You are here: Home › Nigerian Pirates Attack Turkish Ship Off Coast Of Africa 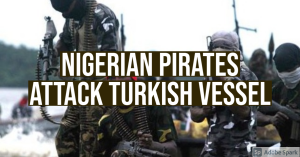 Piracy is known problem in East Africa, near the Somali coast. However, there are also pirates in other places near the continent. In an interesting story reported by the Turkish Anadoulu Agency, a Turkish ship was attacked by pirates near Nigeria and was forced to land in Gabon., with fifteen being kidnapped.

A cargo ship with a largely Turkish crew that was attacked off Nigeria on Saturday is now anchored off neighboring Gabon, and the body of a slain Azerbaijani sailor is due to be brought to shore, according to Turkish officials.

In the Saturday pirate attack, out of 19 or 20 crew members, 15 were kidnapped and three remained with the pirates – both groups all apparently Turkish nationals – while one Azerbaijani crew member was killed. It is unclear how many surviving crew members may still be on the cargo ship.

Speaking to Anadolu Agency, Turkish Ambassador to Gabon Nilufer Erdem Kaygisiz said procedures for the transfer of the slain Azerbaijani crew member will be done quickly.

“First of all, we need to … get there, see the crew,” and then retrieve the body, she added.

En route from Lagos, Nigeria to Cape Town, South Africa, the Mozart was attacked in the Gulf of Guinea, 160 kilometers (100 miles) off the small island nation of Sao Tome.

Speaking to news channel NTV, Turkish Foreign Minister Mevlut Cavusoglu said Turkey has begun initiatives for the safe return of its citizens from the pirates.

“These thugs, pirates who kidnapped our citizens have not yet contacted us,” he explained.

He added: “There have been attacks on our ships and other countries’ ships before. They call after a certain time and make their demands. But all kinds of preparation and work have been done.” (source)

Since Turkey is attempting to rise again as a major world power as a long-term trend, it will be interesting to see what actions Turkey takes against the pirates. When this happened to US, UK, or French ships, the consequences could be severe, especially in the case of the UK. Is it possible that this could not result in the Turks taking a “full Ottoman” approach to it, but inclining to become more aggressive when dealing with like situations?

One does not know. What we can say is that it will be a trend to watch Turkey and her responses to major challenges as in moving to the future, she looks back to Ottomania of the past as a model for how to conduct herself.