You are here: Home › Another Major Anchor Store Is About To Die, And The Coming Commercial Real Estate Bubble 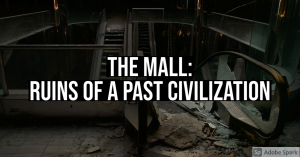 When a plaza, mall, or other type of shopping center is built, it usually includes one or a few ‘anchor stores’, followed by many smaller stores. The concept is that the ‘anchor store’ pays the largest bills and supports, arguably, the existence of the smaller stores. Examples of such anchor stores include such as Sears, JC Penney, and Best Buy for a few.

Now as the Wall Street Journal reports, one anchor store in many malls in the south, Belk, is looking at bankruptcy for all her stores amid the economic fallout from the pandemic.

KKR & Co. Inc., Blackstone Group Inc. and other big lenders to department store chain Belk Inc. are in talks with the company to keep it out of bankruptcy after the chapter 11 process proved difficult for other retailers during the Covid-19 pandemic, according to people familiar with the matter.

While Charlotte, N.C.-based Belk isn’t guaranteed to reach a restructuring agreement, the company, its lenders and private equity owner Sycamore Partners are getting closer to an out-of-court deal, these people said.

Like other department store chains, Belk has struggled with a pullback in retail foot traffic during the Covid-19 pandemic as stuck-at-home consumers turn to online shopping. Belk’s negotiations with lenders focus on fixing the company’s balance sheet, possibly through a debt-for-equity swap or fresh financing. Bloomberg News earlier reported the negotiations.

KKR and Blackstone are interested in converting part of Belk’s $2.6 billion debt into equity, possibly under an out-of-court deal that would allow Sycamore to retain an ownership stake, according to the people familiar with the matter. (source)

Even if she is able to restructure and survive, it is likely only a delay before she is forced to close. The same can be said about the other three anchor stores I mentioned earlier, as well as many others. This is a reflection of several trends taking place, and all that will be important to watch.

First, as the post-World War II world wanes, so are its hallmarks. The “shopping center” is one of them, created in the late 1940s and early 1950s, with the mall debuting in the early 1970s as a continuation of the same consumerist philosophy. This seems to have been intentionally promoted as a part of geostrategy, whereby that the US could not start a war by the 1960s, she instead devalued her dollar (Nixon’s dropping of the gold standard), promoted mass welfare (Johnson’s ‘Great Society’ reforms), began the mass importation of migrants as cheap labor (Immigration Reform Act of 1965), and then opened trade with China (Nixon 1973) as a source of cheap goods. The result was the flooding of the market with cheap goods and cheap labor in exchange for security with American dollars, which looked good, so long as the dollar was a reliable source of payment, i.e. that the US could service her debts, and since she controlled and still controls the world’s reserve currency and the printing press, she can simply hyperinflate- print -any money to pay any debt.

The death of consumerism and a return to war was guaranteed from the moment it was promoted. It was only a question of what time it would happen, and we can see this accelerating in the trends of the 2020s towards major global conflict.

Second, and in conjunction with the previous note, the modern concept of the shopping center is historically abnormal as it is inherently consumption-based. It is not like an open market, but more of a controlled, corporate, factory farm made for the extraction of money. It only works when people can spend money freely, and if they can’t, the malls goes into debt and closes too.

This is why there have been so many mall closures, because they close in proportion to the access to credit and raising debt levels of the public.

Third, and the most important point, malls represent one- among many -major forms of large commercial real estate that is in trouble.

Almost all malls are heavily mortgaged- or leveraged -to banks. The mall ‘ownership companies’ that take rent from stores need to get paid so they can pay banks, and if they can’t pay banks, they lose their property. The problem is that banks want their money but do not want large commercial real estate because it is high-maintenance, its value drops quickly if left on the real estate market, is very difficult to fill with a replacement ‘anchor store’, and if not filled will quickly attract destructive environmental and human elements (homeless people, looters, etc.) that further devalue it until it becomes a run-down building that has to be torn down.

Right now, the US is sitting on at least $3 trillion of commercial real estate debt at risk in a $15 trillion dollar market. As a part of this.

Forget about the residential estate bubble of 2000, which is also a bubble again today, but with this massive bubble on top of it of commercial real estate. It is not a question of if it pops, but when it pops, and when it does, it will cause massive job losses and huge economic problems that might surpass even the effects that COVID ha had on the economy.

Understand clearly that based on fundamentals, there is no solution to the current crisis. Things are not going to ‘get better’ for the US because the economic problems are not being addressed, and the main source of the problems is the historically unprecedented debt levels. There are, as I have pointed out, only two ways to stop this. One is with a combination of disowning the debt leading to a severe deflationary depression (the best for all), or printing that leads to hyperinflation, and governments always choose to print because it is a political option to cover their own misdeeds while distancing themselves from the problem. Trump proved this with the COVID money printing that once beginning, cannot stop and is now approaching its third check because should it stop, it would crash the economy and the dollar since people could not spend because of the debt levels.

The story here is not about one major retailer at bankruptcy risk. Indeed, all of them are, and the issue is that they are tied to the commercial real estate market, and watching them fall created vibrations on a table with dominos carefully balanced and given just enough shaking will knock them over and cause a chain reaction that will ripple throughout the economy.

One final note: I do not give financial advice, and having noted this, it is also going to be a trend to see stock for Wal-Mart and Amazon continue to rise, since they stand to benefit the most from the closure of the big box stores.

Havoc Across The Netherlands As People Riot Against Covid Curfew, Attack Police And Destroy Property. The Mayor Of One Dutch City Warns: “That’s how we’re heading for civil war”
“Retirement Centers” For Millennials Already?
Follow