You are here: Home › Pope Francis Is Absolutely Right, A Repeat Of The Mass Murder In World War II Could Happen Again 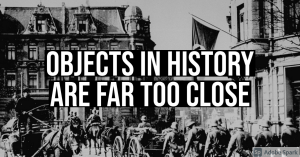 There are a lot of things that Pope Francis says that people disagree with. However, Pope Francis’ recent comments on genocide and how it could happen again are very accurate, where as the AP notes, he said that “ideological proposals that claim to save a people” can end up doing the very opposite and destroy them.

Pope Francis marked Holocaust Remembrance Day on Wednesday by warning that warped ideologies can pave the way to another genocide.

Francis spoke off the cuff at the end of his weekly general audience, held in his private library because of coronavirus restrictions, to commemorate the 76th anniversary of the liberation of the Auschwitz death camp in Poland, where Nazis killed more than 1 million Jews and others.

The Argentine pope insisted on the need to remember, saying it was a sign of humanity and a condition for a peaceful future. But he said remembering “also means to be aware that these things can happen again, starting with ideological proposals that claim to save a people and end up destroying a people and humanity.” (source)

Shoebat.com has been warning for years that the current ideological shifts taking place in Europe right now are extremely dangerous, and that the rise of nationalism is following a pattern that has historically lead Europe to war with itself for centuries. This is amplified by the current “identity crisis” in Europe compounded by a loss of religion, a refusal to reproduce, and as we have noted since 2016, the permitting of large numbers of migrants to enter into Europe and encouraging free reign and license in their behavior.

I am not saying this as an ‘attack’ on either migrant or European. I am saying this because there are clear patterns of manipulation taking place here that endanger both groups.

What Europe needs right now is peace, and even more importantly, a return to God and the Catholic Faith that pulled her out of paganism. However, right now the trends are not favoring this, especially with thee increase in immorality happening, and as goes the Church, so also goes the world.

Considering how each major war has brought with it new developments in weapons technologies, one may say the same thing about this coming conflict, where with the rule of computers, he who controls the AI and ‘Internet of things’ it seems will have the greatest advantage and be most likely to win. However, given the large population of the world and the new weapons of war, it is possible that not just tens of millions may die, but hundreds of millions and maybe even billions.

Remember the words of Professor Jason Jorjani, who as Shoebat.com and many others have noted is aligned with many of the far-right, pagan-inclined groups and individual people. Love him or hate him, Jorjani’s words are very insightful, based on past experience from history’s lessons, of what awaits the future for many.

Islam is evil, but the mass murder of Muslims, as I have always maintained and will continue to maintain, is wrong, because Muslims are people too. Indeed, one’s hatred of Islam and the behaviors of the Muslims and the migrants must be also balanced by a genuine care for their welfare as humans and a desire to see them converted. Remember the great St. Juan de Ribera, who was instrumental in having Moriscos mass expelled from Spain, did so because he desired not just their conversion, but if they were not expelled, either one of two consequences was inevitable- a Muslim rebellion returning Spain to her pre-Isabellian days, or the mass murder of the moriscos. He chose the best option in an imperfect world, and for that reason is one why he is a saint.

In the words of Popes Pius XI and Venerable Pius XII, in their encyclical Mit Brennender Sorge, addressed to the German people over the rise of nationalism,

Whoever exalts race, or the people, or the State, or a particular form of State, or the depositories of power, or any other fundamental value of the human community – however necessary and honorable be their function in worldly things – whoever raises these notions above their standard value and divinizes them to an idolatrous level, distorts and perverts an order of the world planned and created by God; he is far from the true faith in God and from the concept of life which that faith upholds. (source)

These words, written and delivered almost a century ago, are as relevant now as they were then as the world marches in the name of blood and soil again towards war.

Study: Twenty Percent Of Americans At Any Given Time Have An STD
Biden Administration Proposes Expanding COVID Regulations
Follow