You are here: Home › Germany Approves One Billion Euros Worth Of Arms Deals To The Middle East 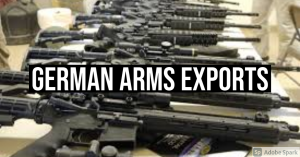 The USA, Russia, China, France, and Germany represent the largest arms dealers in the world, selling guns to many different nations and as a result, often times fueling conflicts for better or too often, for worse, especially from a humanitarian perspective. As Germany is also a major industrial nation, given that she is the industrial heart of Europe, is growing in power as a long-term trend, she has began to assert herself on a world stage with more force, as Deutsche Welle reports that Germany just approved a billion Euros worth of arms deals to the Middle East.

The German government approved a total of €1.16 billion ($1.41 billion) in arms exports during 2020 to countries involved in both the Yemen and Libya conflicts, reported news agency dpa citing the country’s Economy Ministry.

Germany, by December 17, had signed off on permissions to export weapons and military equipment worth €752 million to Egypt.

Permission was also granted to German arms companies for deals worth over €305.1 million to Qatar, over €51 million to the United Arab Emirates, €23.4 million for Kuwait and around €22.9 million to Turkey.

Licenses were granted to Jordan totaling €1.7 million and Bahrain amounting to €1.5 million.

The breakdown was provided by the ministry in response to a request from lower house parliament member Omid Nouripour from Germany’s Green Party. (source)

It will be interesting to see if these exports increase in number or if they remain the same, since it is likely that there will not be a decline, given that global conflict is on the rise as nations are either going back to war or are being used as proxies in preparation for a greater war between the major powers. No matter what the cause, both of such things are “good” for the arms business, since in the words of Smedley Butler, author of “War Is A Racket”, profits are often measured in the loss of life, bloodshed, and destruction, and the more violence in an area, the better it is for business in terms of a strict profit sense.

Humanitarian Crisis Explodes In Tigray, NGOs Cut Off From Access
Even Carl Bernstein Says That The Recent ‘Trump Tapes’ Are Awful
Follow