You are here: Home › Even Carl Bernstein Says That The Recent ‘Trump Tapes’ Are Awful 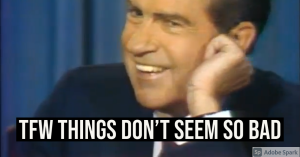 Yesterday, I wrote that Trump’s questionable phone call to Georgia Secretary of State Brad Raffensberger was at best highly questionable, and at worse, evidence of criminal behavior that in combination with other concerns about Trump, could be used against him to put him in jail or face other criminal penalties. I’m not a legal expert, and while I do not want to assume anything, the circumstances do not look good for Trump, especially when the legal system is largely driven by popular sentiments, and Trump’s decline in popularity, evidenced not merely by public sentiment but by how people have been distancing themselves from his administration, is not a good sign for him.

It has been reported that not just the former Mueller prosecutor said this is bad, but also the famed journalist who exposed Nixon and the Watergate Scandal Carl Bernstein has said that the current Trump tapes are worse than what he saw at Watergate.

Georgia Secretary of State Brad Raffensperger as evidence of criminal actions to undo his election loss.

CNN’s Fredricka Whitfield spoke to Bernstein on Sunday in the midst of wall-to-wall coverage on Trump’s phone call where he pressured Raffensperger to help him overturn the state’s results from the 2020 election. When asked if this reminded him of breaking the Watergate scandal, Bernstein said “this was something far worse than Watergate.”

Bernstein called the audio “the ultimate smoking gun tape” and proof of Trump’s attempts “to undermine the electoral system and illegally, improperly and immorally try to instigate a coup in which he remains president of the United States.”

As Bernstein applauded Raffensperger for standing up to Trump, he lamented that the country is unlikely to see a lot of Republicans in Congress denouncing the president’s conduct. Instead, Bernstein hypothesized that Trump’s “craven” allies will carry on with their long shot efforts to interfere with the certification of Trump’s loss to Joe Biden.

“This is fantasy. It’s not delusion because they know what they’re doing,” Bernstein said. This led to his assessment that by supporting Trump, this “may be the end of the Republican Party as a constructive, decent force in our politics in this country.” (source)

As I noted, it is very difficult to support Trump’s conduct on this matter, in either an ethical or a legal way, because of the very questionable nature of the comments made.

It doesn’t matter whether or not one loves or hates Trump. Legally speaking, while he has been in or near a lot of ‘hot water’, these comments may have pushed him into something that he cannot handle. I don’t know, I don’t wish it for the man, but it is not a good time to associate with Trump not merely for ‘optics’, but for possible legal reasons.

The great and sad scandal of what has become of MAGA is the that MAGA platform could have been something great if Trump actually maintained even a tenth of his promises. However, he did not, and the result has been that the country is far worse than it was before, and the same problems have been amplified. Instead of solving problems, Trump turned the White House office into his own reality television show, and making it worse, built up a cult of personality to attack anybody who would question him or his decisions, and especially how MAGA was a bunch of words and a lot of nothing in return.

Now Trump is facing something that maybe he did not expect, and while his ‘cult’ cheers for him, the country continues on a questionable trajectory for the future. The best aspect is that by getting rid of Trump, from a tactical viewpoint, the party has the opportunity to rebuild over the next four years and re-emerge in 2024 and beyond as a vital and potent force if they are strategic, while the Democrats will be forced to accept responsibility for and deal with the problems of Trump and other previous administrations.

But who knows what may happen, for given all that has transpired, it may not be that Trump will ‘run again in 2024’ as some say, but may find himself spending the rest of his days in a jail cell.