You are here: Home › Parler Is Toast And Pretty Much All Her Data Was Stolen 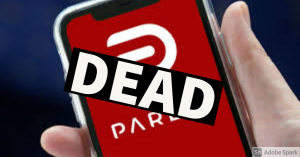 It is bad when a website is shut down because it is practically ghosted by other web servers for what seem to be political views. It is bad when people hack (or “hack”) and steal data. But put the tow together, and it is a disaster. Yet this is what happened with Parler, as the “service” has not only been shut down but its data stolen/taken and now supposedly in the hands of ‘leftists’ who are now claiming it will be used to doxx people.

Right-wing social network Parler was taken offline in the early hours of Monday morning, but not before hackers found a way to download all data posted by users — including messages, images, videos, and users’ location data — shared during last week’s attack on the Capitol.

The data taken from Parler is still being processed, but Trump supporters are already voicing their concerns about what the data dump could expose about them and their activity in Washington, D.C. last week.

Twitter’s decision on Friday to ban President Donald Trump from its platform permanently — together with a raft of major QAnon accounts — should have a boon for Parler, the right-wing Twitter alternative that positioned itself as a “free-speech social network” but was in effect home to hate speech, anti-Semitism, and wild conspiracies.

But before CEO John Matze could even begin to dream of Trump moving his 80 million followers from Twitter to Parler, the roof fell in.

First, within minutes of Trump’s Twitter ban, Google announced it was banning the Parler app from its app store because of lax moderation policies.

A day later, Apple followed suit, and on Sunday, Amazon Web Services, where Parler hosts its platform, announced that it would be pulling the plug.

And so, just after 3 a.m. ET Monday morning, Parler went dark. But that’s not even the worst of it.

A hacker who goes by the name Crash Override on Twitter claims they were able to reverse-engineer the Parler iOS app, in order to find a web address that the application uses internally to retrieve data.

That allows the hacker to make a list of all posts, videos, and images uploaded to Parler — including posts that users had deleted, such as those referring to the Capitol attack last Wednesday. (source)

I never liked Parler. I came out against Parler when it just started to get popular, noting that its Terms of Service open its users up to lawsuits. I advocated against it for this reason.

That said, I am not surprised this happened to Parler. They relied on Amazon web hosting which, while good, is not sufficient for the kind of speech situation that Parler set up.

A few days ago, I said that as wrong as it is, companies like Facebook and Twitter can ban people, and it is true, because while it may be wrong, their legal protections also extend to other groups. However, Parler seems to have taken the ‘lazy’ way out, by not building all her own servers, platforms, and processors. Gab by comparison seems to have done this, and this is why they do not seem to have been shut down.

I am not defending Gab, Parler, Facebook, or Twitter. I am just trying to speak to the reality of the situation based on the current available information.

Freedom of speech, it is not an exaggeration to say, seems to be in its twilight in the US. It has been this way for a while, but the current forms of censorship, given the cultural nuances of the US, are encroaching fast, and unless something changes, while it may exist on paper, for a practical sense it will be but a memory of a previous generation while in the name of the same ‘freedom’ another more dangerous form of intellectual othodoxy will be imposed and to the detriment of the great many.

Also, another important lesson to be learned here is to watch what one puts out online, as clearly, whether this was a hack or a “hack”, the fact is that a lot of people could find themselves facing personal life problems as a result of this. The rules have changed again, and the only thing that one can assume is that when it comes to power, nothing is safe, and one should always err to the side of caution, lest one find oneself an unnecessary target of a political agenda.