You are here: Home › President Joe And The Hot Potato

By Andrew Bieszad on January 22, 2021 in Featured, General 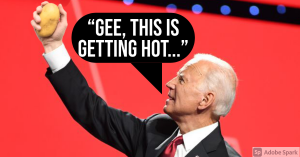 As the praise over President Biden’s election and the constant cheering and hopes projected onto him subsides, reality is now beginning to set in as Biden’s words need to translate into real action for a nation that is becoming more impoverished by the day. One of Biden’s major challenges is going to be dealing with the increased unemployment rates, for as the Washington Post reports by way of Chron.com, last week nine-hundred thousand persons filed for jobless claims in the labor market.

Still, the benchmark paints a dire portrait. Weekly jobless claims are now near what they were at the beginning of September. It’s the 44th straight week that initial claims remain higher than the worst week of the Great Recession.

Biden inherits one of the worst job markets of any modern president, with the country’s unemployment rate at 6.7 percent and nearly 10 million fewer people with jobs than at the beginning of last year, as the pandemic has wreaked havoc on industries like tourism, hospitality and food service.

Biden is calling for a $1.9 trillion stimulus measure that would extend unemployment payments and benefits beyond March, give out $1,400 checks and provide hundreds of millions of dollars to small businesses as well as state and local governments that are struggling. (source)

Many years ago, when I was in middle school, I came across a book called “Screw Unto Others”, which is a book about revenge and everything from practical jokes to downright evil tricks that one an play against another man in order to “get even” with him. I remember the book because it was practically the first of its kind that I ever saw, and while I do not remember the contents, I found it interesting that such things existed and people would do them.

I am reminded of this book as I look at the recent 2020 election, and I will say that what happened just may have been the biggest practical joke in American history ever played.

I said leading up to the 2020 election many times that the real winner of the 2020 election, speaking in the sense of political parties, was the loser, and the loser was the winner, and the reason for this was simple- that in the next five years, there was going to be a very strong chance of systemic issues affecting the country that transcend political party and for which there was going to be no way to avoid as they have been almost a century in the making. In a political sense, what matters is who is in the White House when it happens, for just as with Herbert Hoover and the Great Depression, while he was not the cause of it, he was blamed for it, and as a result Democrats occupied the White House for two full decades until Eisenhower won office.

If we take this as a principle to model our actions after, it makes perfect sense why the Republican Party would not want to seriously contest Trump’s election. As I have said before, there is a lot of evidence that suggests Trump really won, for the amount of observable voter fraud, be it people voting from the dead, people voting more than once, voting from out of state, receiving multiple ballots, and even ballots for Trump being thrown out on camera, the actual truth of what happened does not matter because the entire situation is a matter of optics.

However, what did Biden really win? Yes, he won office, but he also won all of the problems that Trump would have been forced to deal with and, just like Trump or any other candidate, there is no way for them to solve said problems in a peaceful way.

The Republican party is not Trump. It is greater than Trump, just as political parties are greater than any one individual. They are machines, made of individuals who are like parts, and sometimes when the function of a machine changes, the party also must change and in doing so, get rid of some people.

Trump may be rich. He may have fame (formerly), and some power. But Trump is still a part of a machine. He can pretend to be “the Don” all he want, but the Republican party is not his toy. As he found out, when it was time for him to go, no amount of yelling, complaining, and fighting could stop him from being removed and stripped of any social dignity.

In the process of taking down Trump, the Republican party also suffered serious damage to her image, so much that as some people have stated, the party has essentially collapsed. However, there are two points to remember with this:

The reasons for the second are the same for both. There has been a massive loss of trust, and a loss of long-term purpose in both parties. The Democrats have the clear current advantage, but that is not guaranteed. For decade, discussing the Democrat position, the party has used the ‘race card’ to advance herself, but the power of that ‘race card’ is crumbling not just because of a disaffected white bloc, but also increased awareness and anger among the black bloc and the critical hispanic bloc. As I noted, in the last election, even with the demographic changes taking place to all states, such as the “bluing” of Texas, the Black bloc voted about 85-15 for Biden (as opposed to the standard 95/98 to 5/2 Democrat favor) and 56-44 for Biden (as opposed to the standard 70-75/30-25 Democrat favor).

The numbers above showing increase Republican and right-wing party support among the Black and Hispanic blocs is tremendous, and continues to widen. At the current rate, if they continue, then the ‘race stranglehold’ used since the Johnson presidency will be smashed and most likely replaced by economics and class. Thus the Democrat party is at risk of becoming a party defined by elitism and business interests and the Republican party could re-define herself as the party of the working man, and both would transcend racial boundaries. This would also be a reversion to the historical divisions between the Democrat and Republican parties.

This pattern, as noted above, is most likely going to be amplified by a Biden presidency because is does not matter who the previous president was or what he did, since ultimately, the man who is in office is the man holding the ‘hot potato’, for good or for bad. Pointing at the previous president works for a time but always fails. People want leadership and somebody to look up to or blame, and it doesn’t matter what the problems are that await him- in the mind of the public, the president has to conquer them, and if he does not, he is a failure.

What does Biden have to deal with- and in fairness, what Trump would have been forced to reckon with should he have been able to remain in office? The problems would be the decline of the American empire, the continued devaluation of the US dollar to the point of potential hyperinflation, unprecedented levels of left-right political tension that have a strong chance of leading to blood in the streets, the militarization of Europe and Asia, and the continued joblessness and business closures that are causing economic havoc in the nation.

These things are no longer Trump’s problem. In fact, given that the Democrats won control over both the House and the Senate, giving the party ‘complete control’ over the reigns of government, the party as a whole is now fully responsible in the mind of the public for what happened in the next four years.

The best part is, there is no peaceful answer to any of these problems. All of them are going to result in more problems and have a strong chance of violence, which WILL be blamed on the Democrats and Biden.

If the Republicans were in office when this happened, as I have pointed out, there is a real chance they could have gone the way of the Whigs, and a superdemocrat party could have emerged in 2024 as a potential one-party rule for the foreseeable future, as they would have had four years to remake their image.

Instead, the Democrat party questionable ‘victory’ over Trump has generated the directly opposite effect. The Republican party has indeed been detonated from within, but now the party has four years to remake herself for the future. She can come across as a ‘new’ Republican party, one that is ‘diverse’, pro-sodom (since this is a long-term trend for the future), and for the ‘working man’, not a party of “white business elites”, but a base of the white working underclass (as it has been for a long time) as well as the black and Hispanic working men, working as ‘one party’ for a ‘better tomorrow’, and allowing them to build on the long-established trend of billing the Democrats as the ‘real racists’ and the ‘disconnected elites’ who are ‘destroying America’, and given that the trend is to hyperinflation, more money printing, and social violence, while the blame belongs objectively on NEITHER party as a whole, the Democrats stand a strong chance of going down in history with the guilt on their heads because of their position in power at the current time.

The Republicans get a makeover, and the Democrats get saddled with unsolvable problems they will likely get blamed for. The Democrat party will survive- the long-term demographics are in their favor -but they will be significantly weakened as a result, meaning that for the future, they will have to seriously fight for their survival more akin to what the Republicans had to do for decades.

Blood in the streets? Let it flow. Currency devaluation? Run the presses at full speed. Jobs and business? Close those doors and board the windows. I am not saying that these things are good- they are all very bad. I am saying that politically speaking they benefit the Republican party, for all they have to do now is let the Democrats play ‘hot potato’ within their own party while the Republicans jeer the Democrats from the sidelines, eating popcorn and drinking soda as the political dog-and-pony show continues while the nation burns.

The biggest practical joke, for all practical purposes, in American history has been played, and so few realize it has even happened.

Joe Biden Makes This Declaration To The American People About Covid: “things are going to continue to get worse before they get better. …But let me be equally clear, we will get through this.”
Report: Government Prepares FOURTH Round Of Money Printing
Follow