You are here: Home › Scottish Independence Back On The Table With Talk Of Second Referendum 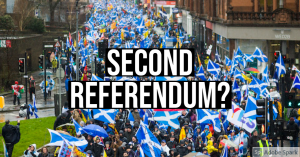 With nationalism on the rise, and separatism continuing as a long-term trend in world and especially European politics, where divisions are often precursors of war, this trend will be important to watch.

With the completion of BREXIT, it has naturally caused a series of problems in the relationship between Europe and the UK. These problems may become more compounded now as Scotland is seeking a second referendum to consider separation from England and thus, the dissolution of the “United Kingdom”.

Scotland’s leader said Sunday that she intends to hold a “legal referendum” on independence from the U.K. if she wins Scottish elections scheduled for May.

Such a move would put First Minister Nicola Sturgeon on a constitutional collision course with Prime Minister Boris Johnson, who opposes another secession vote.

Scotland voted to remain in the U.K. by a margin of 55%-45% in a 2014 referendum that was billed as a once-in-a-generation event. A new binding referendum requires the U.K. government’s approval, and Johnson insists he’ll say no.

Sturgeon argues that Brexit has transformed the situation by dragging Scotland out of the European Union against its will. A narrow majority of U.K. voters opted to leave the EU in a 2016 referendum, but a large majority in Scotland voted to stay.

A string of recent opinion polls suggests a small majority now supports Scotland becoming an independent country. Sturgeon says her Scottish National Party will run in May’s election “to seek the authority of the Scottish people” for a new referendum.

“If the SNP win the Scottish election in a few months’ time on a proposition of giving the people that choice, then what democrat could rightly stand in the way of that? Boris Johnson just clearly fears the verdict and the will of the Scottish people,” Sturgeon told the BBC.

The SNP says that if it wins a majority in the Scottish Parliament in May it will pass legislation allowing for a new referendum once the coronavirus pandemic is over. If Johnson’s government refused to agree, the issue would likely end up in the courts.

“I want to have a legal referendum, that’s what I’m going to seek the authority of the Scottish people for in May and if they give me that authority that’s what I intend to do,” Sturgeon said. (source)