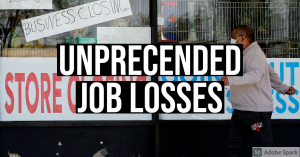 I have been saying repeatedly at Shoebat.com that the effects of COVID were going to be worse than the virus itself, for pandemics pass, but the effects of bad decisions can endure for a very long time. In the case of COVID, it is that the already-crumbling world economic system’s problems have been dramatically amplified by COVID, providing a scapegoat to the problems instead of a natural solution. As a result, the economic chaos is leading to political chaos. The AP put out a recent article highlighting this point, saying that the job losses from COVID are four times worse than the job losses from the 2008 economic crash.

Four times as many jobs were lost last year due to the coronavirus pandemic as during the worst part of the global financial crisis in 2009, a U.N. report said Monday.

The International Labor Organization estimated that the restrictions on businesses and public life destroyed 8.8% of all work hours around the world last year. That is equivalent to 255 million full-time jobs – quadruple the impact of the financial crisis over a decade ago.

“This has been the most severe crisis for the world of work since The Great Depression of the 1930s. Its impact is far greater than that of the global financial crisis of 2009,” said ILO Director-General Guy Ryder. The fallout was almost equally split between reduced work hours and “unprecedented” job losses, he said.

The United Nations agency noted that most people who lost work stopped looking for a job altogether, likely because of restrictions on businesses that hire in big numbers like restaurants, bars, stores, hotels and other services that depend on face-to-face interactions.

The drop in work translates to a loss of $3.7 trillion in income globally — what Ryder called an “extraordinary figure” — with women and young people taking the biggest hits.

The ILO report expects a bounce back in jobs in the second half of the year. But that depends on a reduction in coronavirus infections and the rollout of vaccines. Currently, infections are rising or remain stubbornly high in many countries and vaccine distribution is still slow overall. (source)

This is absolutely horrible, and another piece of evidence to support the thesis that I have held for a while, which is that the effects of the COVID pandemic are going to eclipse the recession of 2008 and the Great Depression the preceded the Second World War.

Many people are suffering, and it is becoming more difficult to find work on which one can provide for one’s family, and the stresses are increasing on people. This system cannot endure continually, and given the current trends, it is preceding the building political chaos that, when all other solutions fail to solve problems, erupt in an open war.