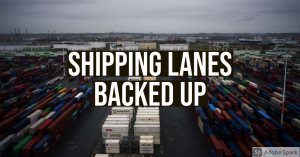 One of the trends that I have explored and been warning about are the shocks that COVID is causing, naturally or artificially, to the supply chain worldwide. I wrote a piece about this in March 2020 discussing tool shipments (which prices have risen for and there have been consistent shortages or delays in purchasing), and I warned in December 2020 that given the effects on food shipments, it could cause a major or a series of major famines, even in the US as a political effect.

I have told people to prepare because things are not going to get easier, but harder, and that while I do not expect to see serious action until at least 2022 for political reasons, 2021 will start to have a tangible sense of uncertainty and trouble on the horizon, or as CCR put it decades ago, a “Bad Moon Risin'”.

Now the Washington Post reports by way of MSN Money that the very supply chain shocks that I warned about are starting to become a reality.

The cost of shipping a container of goods has risen by 80 percent since early November and has nearly tripled over the past year, according to the Freightos Baltic Index. The increase reflects dramatic shifts in consumption during the pandemic, as consumers redirect money they once spent at restaurants or movie theaters to the purchase of record amounts of imported clothing, computers, furniture and other goods.

That abrupt and unprecedented spending shift has upended long-standing trade patterns, causing bottlenecks from the gates of Chinese factories to the doorsteps of U.S. homes.

The commercial disorder is just the latest blow to globalization’s finely tuned engine, capping more than a decade of financial crisis, trade wars, contagion and recession. Each shock has triggered swings in the flow of cash and goods through the $91 trillion global economy. But reverberations from the pandemic are exposing vulnerabilities in the physical plumbing of cross-border commerce that may linger, according to exporters, port officials and trade specialists.

“It’s crazy. Prices are at record highs. Multiple things are happening all at once,” said Phil Levy, an economist with Flexport, a San Francisco-based freight forwarder. “People work off of expectations. But now there’s just so much uncertainty.”

“It seems to be getting worse, not better. I don’t see this ending any time soon,” said Nate Herman, senior vice president for policy at the American Apparel and Footwear Association.

Last year’s stop-and-go global economy effectively shifted 5 million shipping containers from the first half of the year to the second half — on top of customary trade flows, said Lars Jensen, chief executive of SeaIntelligence, a Copenhagen-based consultancy.

“It’s multiple different bottlenecks all at the same time,” Jensen said. “It’s like a train wreck in slow motion.” (source)

I said this before, and I am going to say it again because it is worth repeating.

GET YOUR FOOD NOW.

I’m not talking about “survival prepper end of the world ready pasta in a bag zombie apocalypse packet”, or some fancy tool that has absolutely no practical purpose. When I say “tools”, I’m thinking duct tape, nails, screws, simple hand tools, spare bits and blades for power tools, rulers, zip plastic ties, and shovels, the sort of general things that are always useful but break and one has to go to the store to buy more of.

When I say “food”, I am thinking about the kind of food you buy in reasonable bulk and keep in the pantry and can last for years. It’s spending $20 on a 50-lb bag of rice, or $10 on a 10-lb bag of pinto beans. It’s a one-gallon jug of olive oil for cooking, and $10 for a 10-lb box of oatmeal. Even a few cans of quality canned fruit or vegetables too.

It’s also about buying seeds- not “end of the world survival seeds” -but things you can grow easily in your backyard for fun. GMO or not, things like corn, beets, onions, are all good staples. Learning to raise a small flock (a half-dozen or fewer) chickens is also a wonderful thing, because eggs, meat, plus free fertilizer and bug eaters are always a good thing to have.

I am talking here about how COVID, while it has caused many problems, is also a great opportunity to make fundamental changes to how one lives.

It has been known for a while that the post-Word War II concept of “modern life” was an abberation and was going to be forced to change, in spite of the change that said events forced upon the world.

It’s not COVID, for that is just the catalyst. It was going to happen regardless. The only matter is how one chooses to respond to it, and the healthiest ways are the same as they always have been, which are to adjust expectations, learn skills, save more, spend less, and live simpler. These are lessons as old as time, and yet, the are as new as they have ever been.