You are here: Home › Biden Expands US Laws On Abortion, Rescinds Previous Policies

By Andrew Bieszad on January 29, 2021 in Featured, General 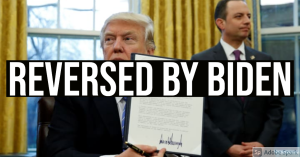 Something that can be said about Democrats is that when they say “I’m going to do X”, often times they mean it, especially if it is something that is not necessarily or objectively is bad. Biden, following in this line, as the BBC reports, has done exactly that with rescinding previous bans from the Trump administration on abortion, opening the way for an increase in the practice.

US President Joe Biden has reversed a ban on federal funds going to international aid groups that perform or inform about abortions.

The memo orders a review of a Trump-era policy blocking funding for US clinics that offer abortion referrals as well.

“I’m not initiating any new law, any new aspect of the law,” he said in the White House Oval Office on Thursday, responding to criticism that he was governing by executive order, rather than congressional legislations.

“There is nothing new that we’re doing here other than restoring the Affordable Care Act … to the way it was before Trump became president,” he added.

Mr Trump’s overhaul of the Title X programme saw tens of millions of dollars stripped from any health centres that offered or referred patients for non-elective abortions, like Planned Parenthood.

Mr Biden on Thursday also removed the US from a 2020 resolution known as the Geneva Consensus, a non-binding charter of more than 30 countries that oppose abortion.

The actions to begin undoing Mr Trump’s abortion and healthcare legacy comes on the eve of the annual anti-abortion March for Life protest, which is being held virtually on Friday. In 2020, Mr Trump made history by becoming the first sitting US president to appear at the rally.

It also comes amid legal battles over abortion, as several mostly Republican southern states pass local regulations that drastically cut back access to the procedure.

Conservatives are newly emboldened to try to reverse 1973’s Roe v Wade landmark Supreme Court decision, which legalised abortion across the US, after Mr. Trump appointed judges who have tilted the court in conservatives’ favour. (source)

This is not a surprise at all. Biden said he was going to do this, and he did it. It doesn’t make it right, but it does make him consistent.

For those saying that “Biden is Catholic”, yes, this is true. So too also was Judas the Iscariot. And for those wondering about why his own bishop is or may not be doing more to chastise Mr. Biden. remember that in the days of the Arian heresy, it was said that only a handful of bishops and priests- such as Sts. Athanasius, Gregory Nazianzen, and Nicholas -stood up to Arius and professed belief in the Trinity.

However, for now, the continued US support for abortion will inevitably come at a price, because one cannot formally continue to support sins that “cry to heaven for vengeance” and think that one can have a stable nation.