You are here: Home › Putin Warns Of A War Of “All Against All”

By Andrew Bieszad on January 29, 2021 in Featured, General 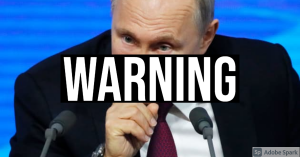 President Putin of Russia, as CNBC reports, made a series of scathing remarks and warnings, saying that due to COVID the world is heading down a similar path that preceded World Wars I and II, and that if caution is not taken, a “war of all against all” could happen.

President Vladimir Putin warned on Wednesday that the coronavirus pandemic has exacerbated preexisting global problems and imbalances, and that these could deteriorate to a point where there is a fight of “all against all.”

“The coronavirus pandemic has become a major challenge to mankind, and it has accelerated structural changes, the preconditions for which were already in place,” he said at a virtual meeting of the World Economic Forum.

“We have every reason to believe that the tensions might be aggravated even further,” Putin warned, citing experts that have likened the current state of global affairs to the 1920s and 1930s and that parallels could be drawn between then and now when it comes to the scale and scope of what he called systemic “challenges and potential threats.”

“All of this cannot but impact international relations, making them less stable and predictable,” he said, according to a translation.

“In the 20th century, the failure and inability to centrally resolve such issues resulted in the catastrophic World War II. Of course, nowadays such a heated conflict is not possible, I hope that it’s not possible in principle, because it would mean the end of our civilization. But I would like to reiterate, that the situation might develop unpredictably and uncontrollably if we will sit on our hands doing nothing to avoid it. And there is a possibility that we may experience an actual collapse of global development that might result in a fight of all against all.” (source)

There is a degree of truth in what Putin said- but it is more applicable to Russia herself, because that is what Russia is facing.

I have mentioned this many times, but right now, Russia is essentially surrounded by countries who, for good or ill reasons, do not like her. China is a nominal ally, and he really has no one to help her. Her best hope is to try to cut deals with other nations to try and keep peace on some borders in order to prevent having to fight a war on multiple fronts.

The future right now really lays with Germany and her response. If Germany goes with NATO, Russia is isolated. If Germany goes with Russia, they can push the US out and give Russia a much greater fighting chance. The reasons for this are, as I have noted, based on fundamentals due to serious decline in Russian society, mostly from the effects of communism. Russia is turning back to her Soviet ways to try to save herself, but this is what brought about her destruction in the first place. Autarchalism will likely not save her due to modern advances in technology. She will be forced to ‘stand and fight’, and considering how each time Germany has made closer and more serious advances into Russia, another major ground war may result in Russia being overtaken.

This is what Putin fears, and rightly so. He is no fool, and this “war of all against all” is not about the world, but about Russia. It is his biggest nightmare as a leader, because he knows if this happens- a US-German alliance with support for Turkey and Japan -there is a chance that Russia may be split up into multiple nations. It is not a joke, but a very real possibility.

This is why, as I have said before, it will take a miracle for Russia to survive, since the odds that she is facing are so severe, especially in her current form.

But that said, recognize the trend for what it is. Shoebat.com has been constantly warning about a major war in the future, and now, a major world leader is warning about it, because the evidence is visible for anybody to see. The problem is that so many do not want to because either they do not understand, the truth is too difficult, or they have malicious intentions. None of these ultimately matter, because the fundamentals are there and could easily turn into something terrible.