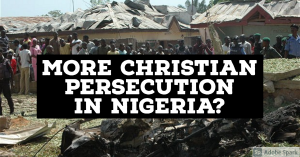 In West Africa, religion often overlaps with agricultural and social conflicts to turn what should be a small matter into deadly encounters. With Christian persecution as a trend on the rise for years, especially in the West African powerhouse of Nigeria that is also major Chinese ally, and key oil producer whose lines for oil tie throughout western Africa all the way to France as well as by sea vessel to China, and is likely to continue for religious as well as political reasons.

According to a report from AFP by way of France 24 and the Christian Post, 33 persons in a Christian-majority area are said to have been killed during a twenty-four hour murder spree by Islamic terrorists.

Community leaders however said a higher total of 33 people were killed in the assaults on the remote five villages which took place early on Thursday.

“The villages were attacked by gunmen on motorcycles in which 21 people were killed and three were injured,” Jalinge said.

He said the assailants launched the attacks during a heavy downpour when residents, including local vigilantes, were in bed.

Jalinge said the attacks occurred despite a round-the-clock curfew in the area after violence between the two sides escalated in recent weeks.

The upsurge in killings prompted the state authorities to initiate a truce, but it has failed.

“It is unfortunate the tit-for-tat killings have continued unabated despite efforts by the authorities and civil societies to forge lasting peace among the warring parties,” Jalinge said.

He said soldiers and policemen had been deployed to enforce the curfew and prevent further attacks.

Luka Biniyat, a spokesman for the Southern Kaduna socio-cultural union SOKAPU, said “33 people from Atyap ethnic group were killed in the attacks on Apiojyim, Kibori, Apiako, Atakmawe and Magamiya villages where several houses were torched.”

Southern Kaduna has for several years been wracked by deadly conflict between Muslim Fulani herders and ethnic Christian farmers over grazing and water rights. (source)