You are here: Home › Far From Anime And Success, Japan’s Youth Continually Slip Away 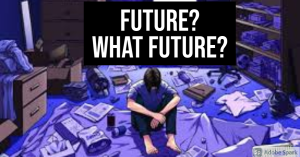 In Japan, a “hikikomori” defines a person who usually has no job, no wife, plays games all day, and has no future. Unfortunately, this is the case for millions of young men who have shied away from work, family, and life in general, and instead pass their day and eventually, away into silence and oblivion

The doors open only once. That’s how people often describe Japan’s hidebound hiring system, in which college students have their best shot at landing a coveted salaried position in the year approaching graduation. Those who successfully navigate the arduous corporate recruiting process will be rewarded with a secure place on the corporate ladder, along with regular raises and promotions. The rest are largely condemned to flit from one low-paying job to the next, with little avenue for advancement and zero job security.

The divide was solidifying when I finished college in 2000. It had been a decade since Japan’s bubble economy had collapsed, and employers drastically scaled back new hires to protect older workers. The labor market had entered an “ice age,” according to media reports.

Having watched my older brother struggle to establish himself in a career, I chose to emigrate to the U.S. to pursue my interest in journalism. Over the years, I read stories about the travails of the so-called lost generation. Faced with limited job prospects, many ended up single and childless. Japan’s 2015 census revealed there were 3.4 million people in their 40s and 50s who had not married and lived with their parents.

It was a brutal knife attack in May 2019, in which the perpetrator was a man in his 50s who had been out of work for many years and living with relatives, that got me thinking about profiling people whose lives had been disrupted by the employment ice age. From a news perspective, the timing was propitious: A month after the attack, the government unveiled plans to help those who were shut out of the labor market in their 20s land full-time positions, with a goal of assisting 300,000 over three years.

There was no shortage of potential subjects for my project. Japan has an estimated 613,000 middle-aged hikikomori, a term usually used to describe socially withdrawn adolescents who hole up in their bedrooms, according to the results of a government survey released in March of last year. Among those in their early 40s, as many as one in three said they had become shut-ins because they had trouble finding or settling into a job after finishing school. (source)

This story is a major issue because it is a part of the larger trend of whereby families are not forming, children are not being born, and in some cases, even whole villages are at risk of disappearing.

Japan’s situation, while extreme, is a refleciton of the whole Western world, where amid low birth rates and a refual to form families in combination with the death of relationships and isolation, society is crumbling as a demographic winter looms. Jobs are only a part of this, because ultimately it is an issue of philosophy- if one does not believe in God, what purpose is there to live for anything outside of oneself, and when one cannot even live for oneself, what purpose is there to life at all? Indeed, there is much purpose, but because of God, and the stripping of God and meaning from life, combined with the inability to provide for oneself, ultimately leads to the evisceration and not the building up of a society, even to the point of complete destruction.

There is never such a thing as too many people, for people are what make a society exist. As the trend grows in Japan, the US, and Europe away from children and more towards indiviualism and isolationism, expect there to be more of such people that emerge, and as well for society to slowly disappear or contract in a dystopian like way seen in science fiction but now reality.

Bashar Al-Assad Declares: ‘Turkey Is The Main Instigator Behind The War Between Armenia And Azerbaijan.’
California Vineyards Laid To Waste By Fires
Follow