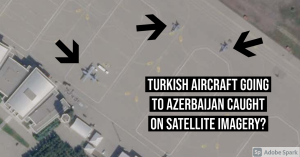 Turkey is flexing her geopolitical and regional muscles once again, and this time it seems to be happening through her ally of Azerbaijan in the current Azeri-Armenian conflict over the disputed region of Nagorno-Karabakh. According to a report from The Drive, satellite images have uncovered what appear to be Turkey secretly transferring fighter jets into Azerbaijan to aid the Azeri side in the conflict.

Satellite imagery shows at least two F-16 Viper fighter jets, almost certainly belonging to the Turkish Air Force, at Ganja International Airport in Azerbaijan earlier this month. This is the first hard evidence that at least some of these jets were in that country after fighting erupted between it and its neighbor Armenia over the long-disputed Nagorno-Karabakh region.

The War Zone obtained the image of Ganja International Airport, dated Oct. 3, 2020, showing the pair of F-16s, as well as what could be a CN-235 light transport aircraft, from Planet Labs. The airport is situated in the western part of Azerbaijan, less than 50 miles north from Nagorno-Karabakh.

Christiaan Triebert, of The New York Times’ Visual Investigations team was among the first to spot the jets in this imagery, providing initial analysis in a thread on Twitter. Triebert said that the region has been a particular point of interest for the Visual Investigations team, as it has been for other news outlets, experts, and observers, since a new major conflict broke out between Azerbaijan and Armenia over Nagorno-Karabakh on Sept. 27, 2020. Since 1994, the Armenian-backed Republic of Artsakh has held de facto control over Nagorno-Karabakh, despite the area being widely recognized as Azerbaijani territory. Fighting has flared up at times in the intervening decades.

The issue of the possible presence of Turkish F-16s at Ganja and their potential involvement in this conflict first arose on Sept. 29, 2020, when Shushan Stepanyan, the Press Secretary of the Minister of Defense of Armenia, claimed that one of these jets flying from that airport had shot down an Armenian Su-25 Frogfoot ground-attack jet. Turkish and Azerbaijani officials categorically denied this and said that no Turkish Vipers were conducting combat operations in the region.

Despite their presence at Ganja, it remains unclear how the F-16s are or are not participating in the fighting in and around Nagorno-Karabakh, which has been steadily escalating since it began last week. If they are not, the question becomes what possible role could they have and why has the deployment been kept secret? Azerbaijan has already been waging a devastating air war against Armenian and Armenian-backed forces using Turkish-made Bayraktar TB2 armed drones, as well as Israeli-made loitering munitions, especially the Israel Aerospace Industries (IAI) Harop. (source)

The rise of Turkish nationalism combined with aspirations to return to the Ottoman past is a major trend that Shoebat.com has been warning about. As the conflict continues, it is likely that Turkey may try to make use of it to expand her own power, and due to her place with NATO, may also become a key partner in attempts to prepare for war against Russia by cutting off her oil supplies and transportation routes to the Middle East and parts of Central Asia.

Pandemic May Bring About Massive Decline In Christian Practice
Poll: Most Americans Say They Are Better Off Under Trump Than Obama
Follow