You are here: Home › Polls Suggest Trump Victory In November 2020 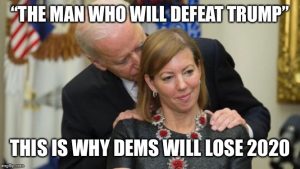 One of the points that Ted, Walid, and I have noted is that their is a clear chance that Trump will win in 2020. There are various reasons for thus, but to summarize the main ones,

1) The incumbent always holds an advantage

2) Biden is objectively one of the worse candidates that one could pick for many reasons regardless of one’s personal feelings about him (potentially serious signs of cognitive decline, history of sexual misconduct, history of questionable behavior towards children, recent history of odd statements at campaign or other political rallies, unclear policy on many issues, unlikable to the public choice of Vice Presidential nominee, etc.)

It has been noted that the latter two points could be changed with a strong Democrat candidate so much that potential swing states could bring in sufficient votes to get a Democrat victory. However, the above points suggest not just a case of mere Democrat incompetency, but almost it is as though the party wants to lose and wants four more years of Trump.

The reason I have said this is because, politically speaking, a Democrat 2020 loss is an almost guarantee of a Democrat 2024 landslide victory as well as a long-term poltiical victory that could put the Republican Party on a path to long-term obsolesence. Likewise, a Republican loss might provide sufficient energy to break the Democrat hold on the Black bloc they have had for over a half-century and also pull large numbers of the White and critical Hispanic blocs into their influence, thus revitalizing the Republican party and reversing decades of work by the Democrat party.

It is with interest then, that according to Zero Hedge, in spite of the current news saying that Trump cannot win, that various computers models put out suggest a Trump victory in November.

In the following Election Review from Camelot Portfolios, we look at what some of the polling firms that called 2016 correctly are seeing today. “Shocking”, their polling suggests that President Trump will be re-elected, either narrowly or by a large margin. Therefore, as Camelot notes, “capital allocators today cannot easily assume next month’s results.”

It’s very possible that Trump will win Florida, North Carolina and Arizona. If so, a win in Pennsylvania or Michigan will likely put him over the top in the electoral college. And speaking of “shocking”, Camelot notes that as far as the Senate and House are concerned, it also appears that Republicans will keep control of the Senate, especially if Trump has a strong night. On the other hand, the House is highly likely to remain in Democratic control.

Which brings us to the punchline, and what Trafalgar sees as the outcome on Nov 3. In a nutshell, based on Trafalgar swing state polls, Trumps wins with 275 electoral votes:

What about the the “winner” in the 2016 polling fiasco, the Democracy Institute, and its Latest Poll for September:

There is no guarantee of anything until the event has passed. However, there is a reasonable concern that in spite of the public cheering for Biden, Trump will likely lose the popular vote by more than in 2016, but since it is only the Electoral College that matters, that is all that he needs to focus his energies on.