You are here: Home › Mexican President Wants Catholic Church To Apologize For Stopping What The Drug Cartels Are Reviving 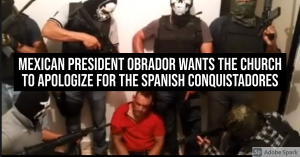 Slavery. Cannibalism. Human sacrifice. Organ harvesting. Murder of children. Openly blaspheming and worshipping devils. This was Mexico not today, but on the eve of the arrival of the Spanish to Mexico, where thanks to a combination of the Church and the Spanish Empire wiped out the infamos paganism and Christianized the natives. However, this is changing in recent times with the decline in religion (including the American Protestant sects) and the rise of the drug cartels who are again actively taking part in all those above mentioned terrible practices today, and which Shoebat.com has covered in extensive detail including in Ted’s 2016 film “Hell across the Border”.

Now the current President of Mexico wants the Catholic Church to ‘apologize’ on behalf of ‘abusing’ the ‘native culure’ according to the AP.

Mexico’s president published an open letter to Pope Francis Saturday calling on the Roman Catholic Church to apologize for abuses of Indigenous peoples during the conquest of Mexico in the 1500s.

“The Catholic Church, the Spanish monarchy and the Mexican government should make a public apology for the offensive atrocities that Indigenous people suffered,” the letter states.

López Obrador asked the pope to make a statement in favor of Miguel Hidalgo, Mexico’s 19th-century independence leader who was once believed to have been excommunicated by the church for his involvement in the uprising. However, researchers later said it appeared that Hidalgo had confessed his sins before he was executed and thus was not excommunicated.

López Obrador said: “I think it would be an act of humility and at the same time greatness” for the church to reconcile posthumously with Hidalgo.

The letter comes as Mexico struggles with how to mark the 500th anniversary of the 1519-1521 conquest, which resulted in the death of a large part of the country’s pre-Hispanic population.

In 2019, López Obrador asked Spain for an apology for the conquest, in which millions of Indigenous people died from violence and disease.

Spanish Foreign Minister Josep Borrell said at the time that Spain “will not issue these apologies that have been requested.” (source)

Abuses did happen, and they are not good, and this is admitted by all. But wiping out paganism, cannibailsm, human trafficking and sacrifice, and other sick things is nothing to apologize for. Instead of trying to attack the Church for political gain, he would be better of trying to deal with the cartels that have turned Mexico into one of the most violent places on Earth.

The Denver Shooting Was Likely An Act Of Self Defense
Will The Zoomers Show Up For Election 2020?
Follow