You are here: Home › Burkina Faso Called An ‘Epicenter’ Of Major Crises 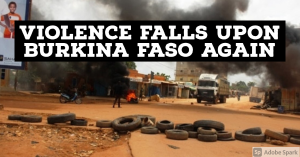 About two years ago, Shoebat.com started to note a rising trend of attacks in the tiny landlocked West African nation of Burkina Faso. We warned that amid increaseing persecution, violence, and social chaos, the small nation could become a catalyst for tipping off greater regional wars in West Africa as well as potentially causing a migration crisis as people try to flee. Now according to the Christian Post, the small nation has been called an ‘epicenter’ of major crises.

The U.S. Commission on International Religious Freedom has released a report highlighting rising attacks against houses of worship and religious leaders in Burkina Faso less than two months before the upcoming presidential election in the West African country.

Once viewed as a bastion of religious tolerance and interfaith harmony in west Africa, Burkina Faso “has suddenly found itself at the epicenter of several global crises, which have contributed to the devolution of religious freedom conditions in the country,” says the independent, bipartisan federal panel in its report.

“Attacks on both Muslim and Christian houses of worship and religious leaders have spiked as jihadist and other militia groups expand their area of influence throughout the country,” it points out. “The government is struggling to rein in the violence, and poor performance and misconduct by government-affiliated forces are exacerbating the situation.”

Burkina Faso, one of the most impoverished countries in the world, has been fighting armed groups with links to al-Qaeda and the Islamic State for more than four years.

USCIRF notes that the U.S. State Department’s International Religious Freedom Report for 2019 recorded that both Muslim and Christian communities in the country had experienced “unprecedented levels” of violence, including the targeting and killing of at least 38 people based on their religious identity.

Attacks on Christian leaders include the kidnapping of a Catholic catechist and his wife in Arbinda in May 2018 by individuals that identified as extremist fighters, the report says. In June that year, armed fighters abducted an Assembly of God pastor and three members of his family in Soum Province. (source)

Migration to Europe is going to be a trend now and for the future. It will be imperative to watch to see if this brings about another wave, which likely would also have the potential effect of increasing nationalism in Europe and specifically in Germany.

Russia Asks For Peace in The Arctic While She Proceeds To Militarize It
The Government Of Turkey Sends This Message To Armenia: ‘You Will Pay’
Follow