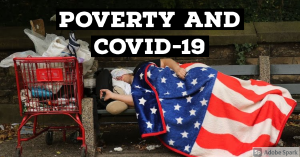 While COVID-19 has affected many people, the main effects from the virus will not be caused by the illness itself but from the circumstantial fallout. This is already showing itself as according to a report from CNBC, the economic shocks caused to the nation have pushed eight million people, or just over two percent, of the US population into poverty.

The number of Americans living in poverty grew by 8 million since May, according to a Columbia University study, which found an increase in poverty rates after early coronavirus relief ended without more to follow.

Although the federal Cares Act, which gave Americans a one-time stimulus check of $1,200 and unemployed workers an extra $600 each week, was successful at offsetting growing poverty rates in the spring, the effects were short-lived, researchers found in the study published Thursday.

After aid diminished toward the end of summer, poverty rates, especially those among minorities and children, rebounded, they said.

“The Cares Act, despite its flaws, was broadly successful in preventing large increases in poverty,” said Zach Parolin, a postdoctoral researcher at Columbia University and one of the study’s authors.

The federal stimulus saved about 18 million Americans from poverty in April, he said, but as of September, that number is down to 4 million.

A family of four earning $26,200 a year or less is considered living below the poverty line, according to the U.S. Department of Health and Human Services. The total number of people in the U.S. living in poverty is 55 million, including the 8 million who joined their ranks since May, according to the Columbia researchers.

The study comes as negotiations for a new coronavirus stimulus package have stalled and Americans continue to be without relief for the foreseeable future.

Columbia researchers tracked monthly poverty rates in the U.S. between February and September, or before and throughout the coronavirus pandemic.

“We find that the monthly poverty rate increased from 15% to 16.7% from February to September 2020, even after taking the CARES Act’s income transfers into account,” wrote the researchers. “Increases in monthly poverty rates have been particularly acute for Black and Hispanic people, as well as for children.”

The results of the Columbia study are underscored by another recent study published by the University of Chicago and the University of Notre Dame, which found that within the last three months alone, 6 million Americans entered poverty.

Those researchers also found that poverty rates temporarily stabilized amid federal economic intervention, but are now getting worse, particularly for certain groups. (source)

A long-term and serious trend to watch for will be the rise in poverty brought about by job insecurity, a shrinking labor market, and stagnant or declining wages.

I have been covering this at Shoebat.com and warning about this, but as this trend worsens, it will have generational affects and may cause the US to resemble more the old world from where many people fled from rather than what many know to be the US.

The Government Of France Shuts Down Major Mosque In Paris To Fight Islamic Violence In The Country
While The Media Keeps Talking About How Biden Is Beating Trump In The Polls, Trump Is Destroying Biden And Harris In Social Media
Follow