You are here: Home › Top Polish Court Rules Most Abortions Illegal In Poland 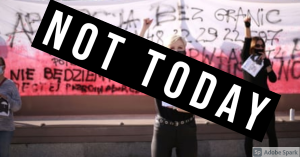 While most of Europe has trended towards more ‘liberalization’, Poland is one of the few nations that has generally been able to remain consistent against this, and instead has ut herself forward as something, even if it is only nominal or politically motivated amid other issues, as an obstacle to these changed. As such, it is interesting that Polish Radio reports that Poland has now banned most abortions under Polish law.

Poland’s top court on Thursday ruled that abortion due to serious foetal defects and severe illnesses violates the country’s constitution.

Poland already has one of the toughest abortion laws in the European Union.

After the new decision goes into effect, abortions will only be allowed if the pregnancy is the result of a crime such as incest or rape, or threatens the life or health of the woman.

The ruling by the Constitutional Tribunal came after a group of conservative MPs from various parties last year urged tighter abortion rules.

“The mere fact of a fetal impairment or an incurable disease cannot decide on the termination of pregnancy from the constitutional perspective”, Constitutional Tribunal judge Justyn Piskorski said after the decision.

The court ruling was welcomed by anti-abortion campaigners but triggered anger among women’s rights activists and leftist groups.

The leader of Poland’s nationalist Confederation party, Krzysztof Bosak, tweeted: “The only possible ruling consistent with the constitution was made. Pity we had to wait so many years for justice!”

Krzysztof Gawkowski, who is the head of Poland’s Left opposition alliance, said in a Tweet that women will now have to “give birth to terminally ill children who will die in terrible torments. This is not politics or religion, it is a crime against humanity.”

Since the conservative Law and Justice party came to power in late 2015, there have been appeals for a blanket ban on all abortions in Poland, and calls to penalise doctors who perform such operations and women who terminate pregnancies.

But proposals for tighter laws triggered extensive street protests, and the government has so far shied away from toughening the rules. (source)

It is true that abortion is not good, and that the goal must be the end of the practice from a moral view, but given the general trends of Poland so far, this is a step in a generally positive direction. The real issue that is to be seen is if this positive trend can be continued amid a Europe that generally is in opposition to such things, considering how the continent is becoming more unstable and inclining towards war.