You are here: Home › Will The US Be Able To Bring Peace To The Situation In Nagorno-Karabakh? 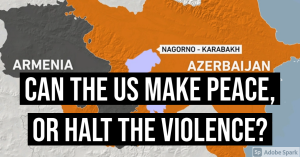 Twice now there have been failed attempts by Russia to broker a peace between Azerbaijan and Armenia. Given how both sides have legitimate grievances with each other, how the Azeri side is strongly backed by Turkey, how Azerbaijan is critical to oil trends and politics in the event of a global war, how it could have major consequences for USA/NATO operations involving Russia, the situation is very difficult and there is a lot potentially here that could go wrong. It is of interest to note then how the AP reports that the US is attempting to broker a cessation of hostilities between both sides.

The Trump administration waded cautiously into international efforts to halt fighting between Armenia and Azerbaijan, which are engaged in their worst conflict in more than 25 years.

Secretary of State Mike Pompeo met separately on Friday in Washington with the foreign ministers of both countries in a bid to promote a cease-fire in hostilities over the disputed region of Nagorno-Karabakh.

There was no immediate comment from any of the sides about the meetings, which followed failed Russian-led attempts to broker a truce and lower-profile U.S. intervention to promote an end to the fighting. U.S. officials, including Pompeo’s deputy, Stephen Biegun, have appealed for the countries to return to a dialogue over the territory.

Meanwhile, heavy fighting raged over Nagorno-Karabakh even as the discussions in Washington were taking place. The two sides traded accusations involving the shelling of residential areas, and authorities in Nagorno-Karabakh said the town of Martakert and several villages in the Martuni region were struck by Azerbaijani rockets.

The Azerbaijani Defense Ministry denied the claim and accused Armenian forces of targeting the Terter, Agdam and Agjabedi regions of Azerbaijan overnight.

Russian President Vladimir Putin said Thursday that Moscow’s information indicated that the combined death toll from the nearly four weeks of fighting was approaching 5,000, a significantly higher number than officially reported by the warring parties.

Russia, along with the United States, has co-chaired the so-called Minsk Group set up by the Organization for Security and Cooperation in Europe to mediate in the conflict.

Putin said Russia is doing its best to negotiate a lasting truce. He voiced hope that the United States would work cooperatively to help end hostilities and mediate a political settlement. (source)

Azerbaijan will be an important place to watch because as the world trend is inclining to war on a global scale, what happens with the tiny land will affect the flow of oil between east and west as well as transporation, and that can have consequences in the future for who wins versus who loses.

It is a very dilicate situation, and the qustion is, can the US make a peace, truce, or some serious cessation to violence happen?

It is going to be something to watch.