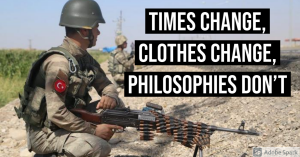 Shoebat.com has been very consistent on the fact that Turkey is trying to revive the Ottoman Empire, and is doing all that she can to realize this.

While there have been two failed ceasefire agreements between Armenia and Azerbaijan, with both sides accusing each other of violations, one only needs to look to Turkey, which in a report from Asia News has violated her own ceasefire agreements eight hundred times, many times in situations involving Christians.

In one year, the Turkish army and the Turkish-backed armed militias of the Syrian National Army (SNA) have been involved in more than 800 attacks in Syria (and Iraq), affecting civilians and displacing tens of thousands of people, a report by the Council on Foreign Relations indicates.

Since Washington and Ankara worked out a truce in October 2019, an average of 2.3 violations have occurred per day. This does not include the incidents that have affected Syrian areas occupied by the Turks, such as Afrin, where a soft form of “ethnic cleansing” is underway.

A year ago, Turkish President Recep Tayyip Erdoğan promised to end his country’s Peace Spring campaign in Syria, following the agreement reached with the Trump administration.

However, the reality on the ground is quite different, as the report by the US foreign policy and international affairs think tank shows.

Most ceasefire violations in Tel Tamer (about 85 per cent) involved armed conflict, with events categorised as battles, armed clashes, shelling or artillery fire, and drone strikes.

About 11.5 per cent of ceasefire violations included looting or property destruction, while 2.9 per cent of incidents involved mass displacement of civilians.

The overall toll of the attacks tracked by the Council on Foreign Relations and the Armed Conflict Location and Event Data Project (ACLED) indicates that the Turkish military and its allies intervened on hundreds of occasions.

These include at least 138 truce violations in Tel Tamer alone, a largely Christian area in Syria with some 30 Assyrian villages.

As the report notes, at the time of the US-brokered truce, the Turkish government had was committed “to ensure safety and well-being of residents of all population centers in the safe zone controlled by the Turkish Forces (safe zone) and reiterated that maximum care will be exercised in order not to cause harm to civilians and civilian infrastructure.”

The Ceasefire Agreement further states that Turkey and the United States are “committed to safeguard religious and ethnic minorities.”

In reality, the evidence suggests that Yazidis, Armenians, Kurds, Assyrian Christians and Arabs continue to be forcibly displaced, attacked and victimised and are effectively prevented from returning home. Many still live in internally displaced (IDP) camps.

Turkish attacks, experts explain, have contributed to the displacement of the region’s indigenous Assyrian community. At least 137 Christian families were displaced during the invasion of Turkey during the Peace Spring operation.

Even after the ceasefire of October 2019, Turkish attacks continued, forcing civilians to flee.

Turkey’s operation Peace Spring has already changed the demography of some areas, including Ras al-Ayn (Rish Ayno in Aramaic and as Serêkaniyê in Kurdish).

The attack on Tel Tamer could thus be an attempt to alter its demography, aimed at territorial expansion or ethnic cleansing. (source)

One should remember that it was only a century ago that Turkey annihilated the remaining and ancient Christian population from her nation, and persecuted many others in neighboring countries.

Time change but the nature of man does not. What is happening right now in Syria, which the world has more or less turned her attention temporarily away from, is very serious. The Ottoman giant is awaking from her slumber again, and is again turning her anger towards the Christian peoples near to her as well as alluding to global aspirations once again.

This is not just about the persecution of Christians. This is about the revival of something very ancient, a philosophy that never died, but just went to sleep while few took notice of it.

Turkey is coming back. This is a major trend that is going to shake the whole Middle East and world. Be ready for it, as it will take many by surprise and they will not know what has happened until after it is too late.

Will The US Be Able To Bring Peace To The Situation In Nagorno-Karabakh?
The Trump Administration Declares To The Whole World: ‘No One Has A Right To Have An Abortion.’
Follow